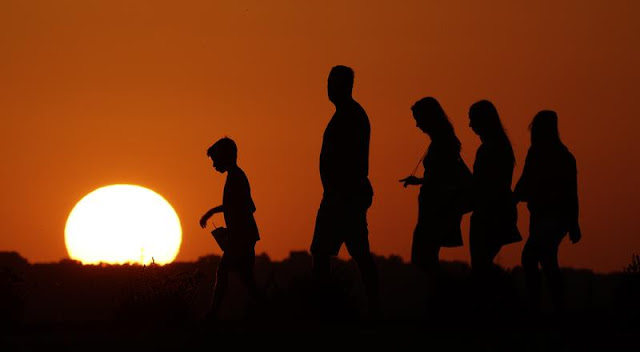 Hearing this interview on my local NPR station today reminded me of The One Who Got Away ... the academic version.

When I was at University of Arizona during the early days of climate-change, Dr. Diana Liverman was a guest speaker a few times. I also met her -- and more importantly her graduate students -- at conferences. I almost transferred to Penn State, where she was on the faculty, even though PhD students do not really do that.

It did not work out, and she ended up coming to Arizona, too late for me to have a decent advisor, though I eventually wiggled my way through.

Hearing her cogent discussion on the radio took me way back, but I have no regrets -- I love what I do now and work with her would have kept me in the R-1 orbit.

Like many geographers, she is deeply worried but not yet resigned -- we could not continue to teach if we did not retain at least some hope. And like many geographers, her work is deeply interdisciplinary. The interview draws on a recent report -- Trajectories of the Earth System in the Anthropocene -- that she published with a global team of scientists from many disciplines.
I will be sharing this with many of my students, including those in my Environmental Regulations class this fall. In addition to her insights on the physical science, she mentions something that I will be stressing all semester: the U.S. Federal government is an important environmental actor, but it is not the only one. While it is abdicating its environmental responsibilities, other nations and our own state and local governments -- as well as individuals and private corporations -- must and will fill the void.

Posted by James Hayes-Bohanan at 7:44 PM