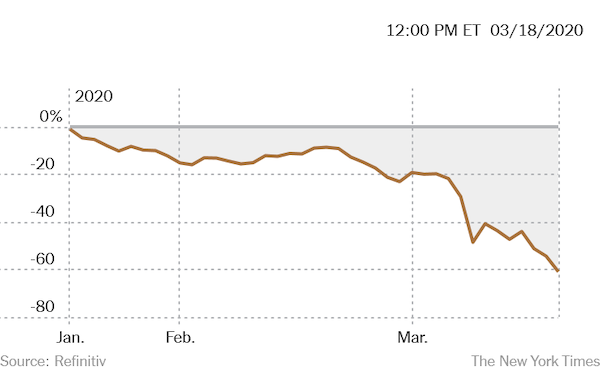 The price of the benchmark West Texas Intermediate crude oil has fallen by more than half since the beginning of the year. So many other things are out of kilter in the world that many folks have hardly noticed. To the question of whether this is a good thing or a bad thing, the answer is: it depends.

Of course, that is always the answer when prices change, but it is a far more appropriate answer than usual in this case. At a minimum, the answer depends upon:
Just kidding about climate change: this has climate implications whether people believe it or not.

Credit for these factors goes to two excellent reports on the recent slide, which is generally attributed to a price war between Saudi Arabia and Russia. That is, between Crown Prince Mohammed bin Salman and President Vladimir Putin -- two people who have rather unusual relationships with the current U.S. president. If this is a price war, it is no ordinary one, as each of these actors sees benefits in the geopolitical and economic consequences that are unfolding in the short term.

Rather than elaborate some of the tradeoffs to which my small list alludes, I refer readers to those excellent reports, which I am assigning to students in my Advanced Global Thinking class because there are so many complex geographical questions raised here.

I would start with the March 9 New York Times article Saudi Oil Price Cut Is a Market Shock With Wide Tremors by Clifford Krauss and then listen -- at least twice -- to Cheap Oil and the Climate, a discussion between Steve Curwood of Living on Earth (LOE) and Lorne Stockman of Oil Change International. 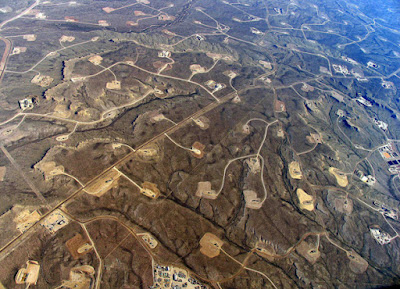 The transcript of the LOE discussion includes this aerial photograph of Jonah Field in Wyoming. One can easily imagine the dozens of wells reaching into this deposit, like straws in a giant scorpion bowl. It is an excellent example of the relationships among price, scarcity, and technology in the extraction of any mineral. Whether this is an oil deposit is a question of how much oil is present but also of what the price of oil is. It appears and disappears with price fluctuations.
Posted by James Hayes-Bohanan at 1:32 PM