Having read earlier today that Cabo Verde had not yet reported any Coronavirus cases, I was saddened and surprised to see it marked on the definitive Global Cases map from ESRI and Johns Hopkins, which as of this writing (10pm EDT) indicated 305,234 cases worldwide, up by five thousand from when I checked earlier today.

When I zoomed in, I noticed two dots where Cabo Verde should be. Clicking on each in turn, I noticed the problem: 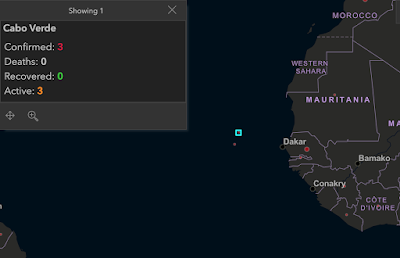 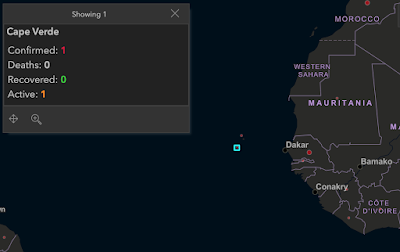 The country has 4 active cases, reported under the new and old names of the country. A former Portuguese colony that became independent in 1975, it has been called Cabo Verde for centuries, Cape Verde in English.

It has also represented incorrectly on maps in many ways over the years. I completed my doctorate in geography without being quite sure where or what these islands were, because I saw so many contradictions on maps -- some of them suggesting they were still part of Portugal, others indicating that the name referred both to the islands and to a point of land (a cape) in Senegal.

In 2013, the United Nations ceased using the name "Cape Verde" at all, insisting that Cabo Verde should be used, even in an English context. In southeastern Massachusetts -- home of the biggest Cape Verdean / Cabo Verdean / Kabuverdianu community outside the country itself -- I often read and hear both of these versions of the name, and a couple more.

Geographer Tanya Basu reported on the name change for National Geographic at the time, and explained the bit about Senegal in the process.

The Johns Hopkins map synthesized databases from at least six organizations: Esri, WHO, HERE, GARMIN, NOAA, and USGS (all of these employ geographers, by the way). It appears that at least one of these is using the old name. I will of course be contacting some of these agencies to report the error while the numbers are still small.

For general information about the geography of Cabo Verde, see my 2018 Basics post. For the story of another mistake I noticed in an online map of the country, see my 2013 Google In, Google Out post.

For the story and photos of my 2006 travel course, see my Cabo Verde - Cape Verde
Geography of Sustainable Development - Geografia do desenvolimento sustenavel web page. Since then, I have had the opportunity to learn a lot more about the country, and to give a presentation at a Cabo Verde conference at my own university. I have also begun to study Kriolu (one of the two national languages, similar to but distinct from Portuguese) and to help develop a minor in Cape Verdean Studies at Bridgewater State University. I will eventually be offering a Fogo version of my Geography of Coffee travel course as my own contribution to that academic minor.

About 15 hours after I contacted the Johns Hopkins team, the error was corrected. It appears the total incidence as of this writing is 3. I do not know if they are on more than one of the islands or all on the same island.

Posted by James Hayes-Bohanan at 10:21 PM