In alternate autumn semesters, I enjoy a class we call Land Protection. When I started teaching it, I used a more cumbersome name that I inherited from the professor who first developed it. I think the name had been put together by a committee, and I was glad I was able to find a simpler way to describe what he and I have both endeavored to do with the course -- over what has now become something like four decades.

I took the name from a book that I continue to use each time I teach the course: Protecting the Land: Conservation Easements Past, Present, and Future, an edited collection published by Island Press in 2000. The book includes case studies about the efforts to protect land in many parts of the United States. In this case, "protect" means to put restrict the development of the land  through various legal and financial arrangements, so that it remains as open space -- fields, forests and the like -- or agricultural land. The cases include a lot of different organizations and strategies, as well as land being protected for different reasons. I really do enjoy it, and I think my students do, too.

One of the cases is of particular interest to me as a geographer, because the spatial arrangement of the case raises so many unusual considerations. The development of the Ice Age National Scenic Trail involved nonprofit organizations and several levels of government, and a linear trail raises all kinds of questions about scale, finance and property rights. Such a trail also makes accessible wild (or somewhat wild) lands available to a large number of people who might otherwise not get to visit such places.

Finally, in this particular case, the places include sites that reveal the fascinating (to me) geomorphology of glaciers. They have not been in Wisconsin for over 20,000 years, but they have shaped almost every acre of the Badger State. And even the part they missed (the Driftless Area) is fascinating to those who care about such things. In fact, when driving across Wisconsin (one of my favorite states) with my favorite librarian (who is also my spouse despite suffering through my graduate work in geomorphology), I once got way too excited when I realized I was in the Driftless Area for the first time.

All of this came to mind in recent weeks as I found a couple of interesting stories about other trails. The first was Supreme Court Pipeline Fight Could Disrupt How The Appalachian Trail Is Run, a radio story by radio journalist Becky Sullivan. I look forward to listening to it with my Land Protection students, because this is the most famous of U.S. trails, and like the Ice Age Trail, its management includes a complex mix of federal and other entities. By the time I offer the class again, the Supreme Court will have ruled on this case, and we will have plenty to discuss about both the practical questions of how pipelines cross protected areas and the technical questions of jurisdiction. 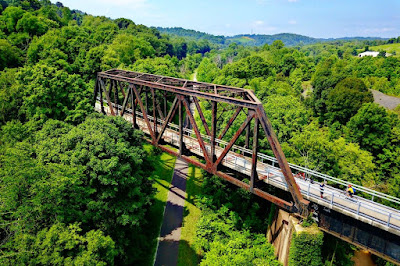 The second trail story to come to my attention is America's First Coast-To-Coast Bike Path Is Over Halfway Finished, posted in August 2019 by blogger Ryan Ford. In describing progress on the trail, he explains some of the strategies for making such long-distance connections as this ambitious, 3,700-mile path, and some of the obstacles to do so. Many partners are needed for such efforts, but the lead organization in this case is Rails-to-Trails Conservancy.

The name itself is a strong hint about one of the key strategies: use abandoned railroad rights-of-way wherever possible. In the middle of the 19th century, the United States made it ridiculously lucrative to build railroads. The result was a half century of building tracks parallel to each other all over the continent. Eventually, the redundant tracks started to be removed, and active rail mileage has declined ever since its peak in 1910. This left long, narrow strips of land that had been selected and modified to be a level as possible, often not useful for any practical development, and running continuously through land that would otherwise be costly to buy. As a result, securing the rights to use this land for walking and biking has been a priority of conservation and recreation groups for generations. 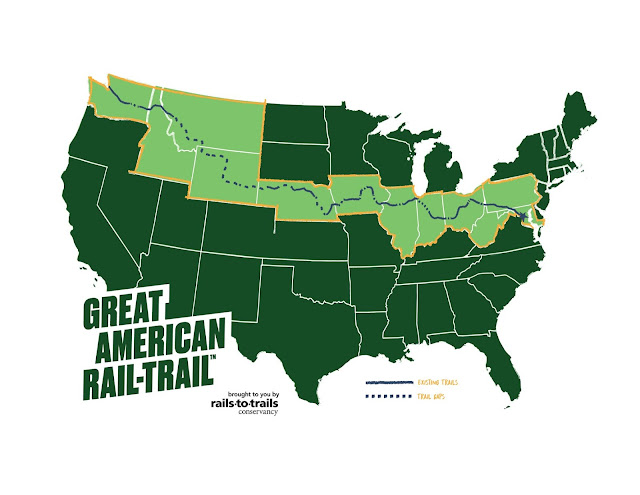 All of these issues are relevant to the Bay Circuit Trail, a very long-term project much closer to home. In fact, part of it runs within sight of our classroom (though not along the active train tracks we can see from our window), and students in the class a few years ago actually did some work to help develop local legs of the trail known as the Nunckatessett Greenway.

The other book I have used since the first time I taught the course is even older by one year. David Foster's book Thoreau's Country: Journey Through a Transformed Landscape was published in 1999 and draws on journals written by Henry David Thoreau a century and a half before that. It is an excellent discussion of how and why the landscape of New England has changed from mostly forested to mostly deforested to mostly forested again, with plenty of suggestions about what this means for managing land in this region, where most of my students have been raised and are likely to stay. (Because as expensive and often dysfunctional as it is, New England is beautiful and diverse and fascinating.)

I frequently consider alternatives and have sometimes added a third book (several different titles) to the mix, but these remain the constants, as long as they remain available. The combination prepares people well for paid or volunteer work in land trusts or conservation commissions -- two types of organizations that I have worked with and that are very integral to resilience and sustainability efforts at the regional or community level.

Posted by James Hayes-Bohanan at 4:44 PM