Tom and the Volcano

Just a few weeks ago, a hiker on Mauna Loa found this bomb. More precisely, they re-found it, leading to a retelling of its remarkable story. 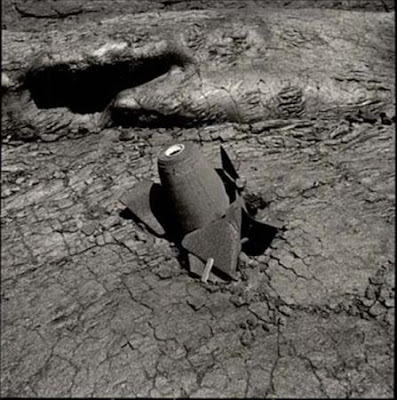 Rocks that fall from the ejecta of a volcano are called bombs, but this was a bomb dropped deliberately into the volcano 85 years earlier.

The photo was not taken by the hiker; it was taken as part of a 1977 study of the bombing, which had taken place in late 1935. It was one of 40 bombs dropped in the volcano to protect the water supply of Hilo.

The rediscovery of the bomb led to the retelling of the story by the staff of the USGS Hawaii Volcano Observatory, the agency whose founder had organized the bombing. Their account -- in blog posts dated March 5 and March 12 -- provides insight into volcanology as a descriptive and occasionally prescriptive discipline.

The red icon on this map of the Island of Hawai'i marks the Wailuku River, which reaches the sea at nearby Hilo. In late 1935, lava flowing from Mauna Loa was approaching the city. If the flow reached the Wailuku River just upstream of the city, its water supply could be interrupted.

Volcanologist Thomas Jaggar asked the Army Air Corps to bomb the flow, and this succeeded in stopping it. Better put: forty bombs were dropped, the flow slowed, and the river was spared. The volcanologist claimed victory, but even the pilots were skeptical -- presumably because they could see the scale of the flow relative to the magnitude of the munitions they used.

The story reminds me of one of the first environmental geography books I read: The Control of Nature by John McPhee, a Princeton professor of English, now emeritus, who is one of the best geography writers I know. Among the three stories he tells is one of an effort to divert a lava flow in Iceland. Rather than dropping bombs, the citizenry confronted the volcano in that story with water hoses. Read McPhee's engaging account to learn why that was not as crazy as it sounds.

This MTV classic has been running in my mind since I first read the story. Welcome to my earworm.

Posted by James Hayes-Bohanan at 9:31 AM