Nothing is certain, Benjamin Franklin said, except death and taxes. Actually, a third thing is certain, especially in the days following Ronald Reagan's reign of error: worrying and complaining about taxes more than death itself.

President Reagan created an atmosphere of disdain for government employees, even though he was a government employee for much of his life. In fact, even as he convinced many Americans that government employees (himself presumably excepted) were lazy, inefficient, and unproductive, he increased the federal work force by 6.2 percent (mostly in the executive branch) between 1981 and 1989. At the same time, he increased revenues, spending, deficits, and debts. His most important legacy, however, is the mistrust of government and government workers -- even on the part of some government officials and those who rely on the government for essential services (which is all of us, in one form or another). He also helped to make millionaires of anti-government demagogues such as Rush Limbaugh and Glenn Beck (who can hardly be called productive members of society themselves.)

All of this is important background for understanding a much more local phenomenon: the repeated failure of my adopted hometown -- Bridgewater, Massachusetts -- to provide for its basic needs. 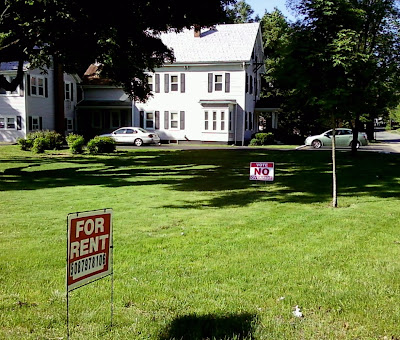 In Massachusetts, opponents of taxation passed a law -- Proposition 2-1/2 -- that requires a majority vote for any town to raise its property taxes by more than 2.5 percent. This seems a reasonable stipulation -- after all, taxation should be tied to representation. We had had a little dust-up about that here 235 years ago.

In combination with the anti-government mentality that has grown since the 1980s, however, this has proved a paralyzing requirement, especially since an increase of several percentage points might be needed after several years of zero-percent growth in town funding. The cost of nearly all goods and services increases with time, but town government is expected to deliver vital services on the same amount of income, year after year.

So, the absentee landlords in town -- even the former police chief -- already have their anti-override signs on their apartment buildings (as shown above). So "free speech" is tied more closely to property ownership than it is to residency or citizenship. Moreover, after more than a decade of pushing Bridgewater taxes -- and services -- to the bottom, these guys want to keep squeezing. No senior center, no library, warehouses in place of schools, and dramatically fewer cops and firefighters.

Many of those who oppose consistently oppose taxes at the local level insist that more money should come from the state level, particularly the local college (full disclosure: I work there) and the prison. Each of these provides essential services to the Commonwealth (including local residents) while also providing employment at all levels to a couple thousand area residents, many hundreds of whom live in town. Each also makes direct payments in lieu of taxes, as well as many indirect contributions to the well-being of the town.

There is some legitimate resistance, perhaps, from seniors on fixed incomes. Property taxes certainly are regressive compared to current income, but they are not regressive in comparison to wealth, as measured by home value. Seniors typically have property that is worth 10 to 100 times what they paid for it, and property tax is both an investment in that value and a recognition that the value is maintained, in large part, by government services. A responsibly structured reverse mortgage would allow them to invest in the community infrastructure that maintains the property values.

In my town, we are spend a very modest amount -- just over one percent the value of each property -- to protect and enhance the property value. Since people have resisted making those investments, property values have crashed. We entered the decline in the housing market sooner than other towns, and if we do not change things, we will return to a healthy housing market more slowly than others. As I always remind people -- our town lost library certification before the recession, because even in a healthy economy, we did not vote to invest in our community.

Statewide reforms could help. Protections for low-income seniors exist, but they are minimal. I would like to see a cap, perhaps implemented through the state tax return. Seniors earning below a certain threshold income could get tax credits that would offset some of the post-retirement increases in their taxes. It might also be possible to defer some part of the tax bill for seniors until the sale of a primary residence, by the owner or by his or her estate.

Another reform, which I have proposed as part of a statewide task force on budget priorities, would be to regionalize certain town services. New Englanders often react viscerally to this suggestion, because they wish to maintain "local control" over services. This control is an illusion, however, if the services are constantly under stress from tax resistance. For many kinds of services, combining departments with neighboring towns -- or even operating them at the county level -- would greatly reduce overhead while maintaining most or all current points of service, and generally improving the quality of those services. Each town should have a library, some schools, a police station, and a fire station. But each town does not need a library system, a school system, a police department, and a fire department.

I will post more detail about the regionalization proposal separately. Even without it, however, town services are a good investment -- both in the quality of our community and in the value of our properties.

Posted by James Hayes-Bohanan at 5:40 AM