Routes to Your Roots

My favorite librarian Pamela encountered a lot of genealogy enthusiasts when she worked at the McAllen Memorial Library in the 1990s, just prior to the advent of internet-based research. She brought home stories of the dedicated -- obsessed might be a better word -- retirees who toiled endlessly in research into their family origins. Pam wryly observed that one "illegitimate" birth could wreck the whole enterprise, but I countered that whatever relationships people think exist are the ones that count for most purposes. The exception, of course, would be genetic traits and diseases, which do not necessarily follow recognized parentages.

I am fortunate that my own great grandmother did this kind of research, so that I know a fair bit about my family's history, dating back to the first AWOL Scottish sailor landing in Boston in 1734, down through Maine pioneer and bear wrestler Ebenezer Kezar.

And that is exactly how many of us think about genealogy -- it is the study of family history. As William A. Davis makes clear in the Boston Globe article Tracing your roots can follow the Cabot Trail, however, genealogy research is also geographic research. After all, each ancestor was both of a time and of a place. The article describes the terrific work of the Nova Scotia tourism officials, who have created a beautiful geographic interface specifically for genealogy tourists.

The image below, for example, shows incidents of "Buchanan" -- which could represent my distant Scottish relatives -- in orange circles, graduated according to the number of Buchanans in historic record at each locality. The blue icons are links to archives I could actually visit to search records. Convenient menus then link directly to hotels and other services, and since the entire site is driven by Google Maps, it is easy to calculate driving routes -- including ferries -- from home. This is a wonderful piece of applied geography! 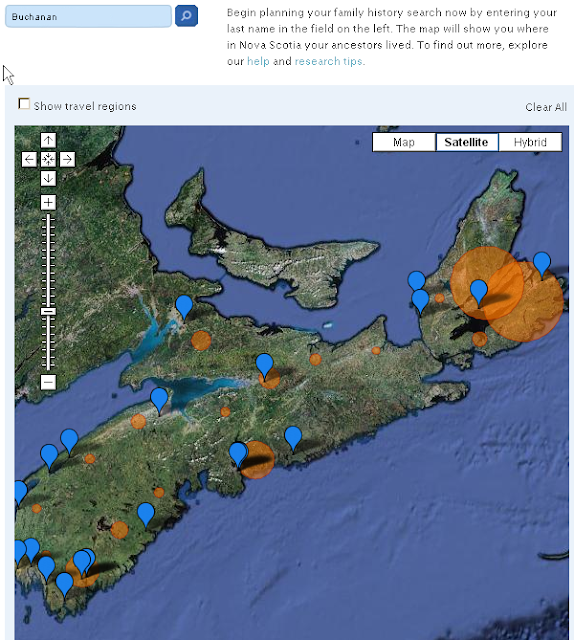 The "Cabot Trail" in  the article's title was not familiar to me; it is a 300-mile loop drive in Cape Breton that is considered one of the world's most scenic road trips, according to an article in National Geographic's Drives of a Lifetime series.
I have not yet been to Nova Scotia, though my friend Tom is always encouraging me to do so. When I go, I'll be on the lookout for long-lost cousins!

Posted by James Hayes-Bohanan at 12:35 PM