Right Down the Street

My interest in the geography of coffee began about a decade ago, and was focused -- as it should be -- on the farmers who grow it, and the economic and environmental conditions in which it is grown. Eventually, though, my interest expanded to include coffee shops, particularly to independent coffee shops that compete in the shadows of the big chain outlets.

I know exactly where I was when this new interest began to emerge in 2006: Country Kitchen Donuts in Walpole, Massachusetts. I sat in the place for close to an hour as Pam was meeting with students at nearby Norfolk Aggie. The coffee was quite decent -- not specialty or fair trade, but better than most. After a while, I realized that the place had quite a loyal following. A bunch of guys chatting in a nearby booth seemed right at home, and commuters lined up to the door to get coffee, donuts, and little rectangular muffins. Without a drive-through and with a DD right next door, this place was holding its own.

At that moment, I conceived of an assignment that is now standard in my coffee seminar -- students do a bit of field research by visiting independent coffee shops. They report on the experience, the atmosphere, the customers, the coffee, and the proximity to competing national chains. Invariably, any coffee shop that is surviving in Massachusetts is doing so in direct competition with DD, which is very thick on the ground, and perhaps also with Starbucks. Reflecting on what leads to such successes is a really good part of this assignment. In 2010, I created a Yelp account for students in the class, so that the whole world (including me!) can find their reviews easily, and benefit from their insights.

So, now I can have a lot of reasons to love a coffee shop -- a commitment to socially and environmentally friendly coffee sourcing, excellent coffee preparation, decent treatment of customers and employees, decor, and friend service are among them. (Dunkin Donuts -- aka Coffee Hell -- is nearly perfect in missing on ALL counts, by the way.) Of course, I love a shop best that makes a strong effort on all of these fronts. Many of those gems can be found among my own Yelp reviews -- which include only shops that offer at least some fair trade or organic coffee.

All of this was in the back of my mind when my favorite librarian read the following passage to me:

"Omaha  has been able to absorb influences both cosmopolitan and homogenizing wihtout losing its essence. Omaha is still Omaha, perhaps more than ever.... When Starbucks came to Omaha just six years ago [ca. 2003], opening its first store, in typically predatory fashion, a few doors down from a locally owned coffeehouse called the Village Grinder, patronage of the latter increased."

It is from the article "Nebraska" by film director Alexander Payne (of Sideways fame), in a book entitled State by State, which Pam and I are reading as part of the Celebrating the States blog project. Loving a good story about underdog local businesses, I decided to look up the shop. Starbucks did, indeed, open a store on the same side of the same street, less than 500 feet away. 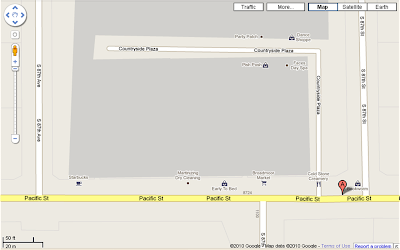 
I could not find a web site for the shop, but it has a loyal following on Facebook. (Someone should review it on Yelp!) From the postings and photos, it seems that creativity and spontaneity are key elements of this cafe's success.
Payne's comments and the experience of the Village Grinder notwithstanding, Starbucks seems to have taken hold in Omaha -- each red dot on the map below represents a site. I'm not sure whether this map has kept up with the 2008 closing of 600 Starbucks shops nationwide, seven of which were in Nebraska, two of these in Omaha. 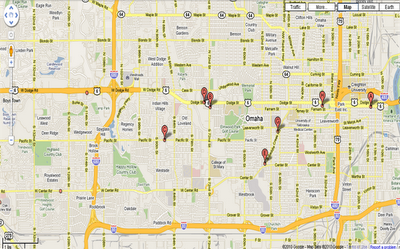 I'm happy that the Village Grinder seems to be thriving -- it must be a good shop. I cannot help but hope that in addition to serving its customers well, it is treating the farmers and the land fairly as well. For this reason, I posted a question about the coffee itself on the Village Grinder's Facebook Wall, and it disappeared. I hope that was a Facebook failure, rather than a reluctance to discuss the coffee. I tried a different approach, and will amend this post when I find out more.

Posted by James Hayes-Bohanan at 1:23 PM