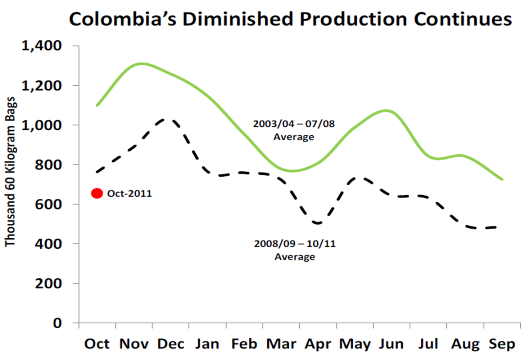 In the process of researching trends in coffee production, I found a valuable report from the USDA entitled, simply, Coffee: World Markets and Trade. The 22-page report from the Foreign Agricultural Service was published in December 2011 and provides the most recent comprehensive portrait of world coffee production, consumption, and trade. It is easy to discern patterns at the national level and to examine trends on an annual basis at the global level. For countries that produce both Arabica and Robusta (such as Indonesia and Brazil, the relative importance of each can be seen.

Of greatest interest to consumers might be what the report reveals about the causes of current price increases. The graph of Colombian production above is at the very beginning of the report. The graphic above, by the way, is something Edward Tufte would appreciate. It presents the problem quite elegantly, but does require careful attention. It does not have trend lines. Rather, it compares the annual fluctuations from early in the decade to more recent patterns. That is, the solid green curve is used as the control or baseline, against which the average of the three most recent crop years is compared. The red dot is a single data point reported just prior to the publication of the report, and it suggests that this year's crop is starting at an even lower point than recent trends.

As the third-largest producer, the impact of Colombia's declining production are much greater than might be expected. The report cites heavy rains, coffee rust, and the coffee cherry borer as causes of the decline. Other experts cite Colombia as an example of the effects of climate change on coffee production, (see New York Times on heat damage to Colombian coffee). This suggests that the recent changes might represent a "new normal" for Colombia and might portend similar changes throughout the world's coffeelands. An additional problem is that coffee crops are sometimes collateral damage in programs to eradicate coca, since the spraying of a single-year crop of coca can damage nearby coffee on a permanent basis. Former coca farmers in Cauca are reversing that trend by moving deliberately from coca to coffee, but this is not yet common practice.

Production in Brazil and Vietnam are remaining relatively constant and any increase in Indonesia is going simply to meet its domestic demand. This combination of factors leads FAS to conclude that the current crop year will end with about 24 million bags on hand. That is a lot of coffee, but it would be the lowest level of ending stocks in several years, so expect to pay more. Farmers lucky enough to have direct connections to the market may be paid a bit more per bag  as well, but most of the gains will go to traders, middlemen, and retailers.

Note that all figures in the report are in thousands of 60-kg (132-pound) bags, such as the one my good friend Don Alfredo Rayo was carrying when we saw him at Sol Cafe in January 2007. Throughout most of the world, coffee workers routinely carry bags of this size, often stacking them in warehouses without any mechanical equipment.