One of the most important things we like to show our EarthView students is the Pacific Ring of Fire. From inside our giant globe, they can see this enormous zone of tectonic activity as never before. Volcanoes and earthquakes surround the Pacific Ocean as all of the major kinds of tectonic boundaries create the majority of these landforms and events in the world.

When I travel with students to Nicaragua, we spend time with visiting just a few of the active and inactive volcanoes that constitute the Ring of Fire. Because of its location along the convergent boundary between the Cocos Plate (a small portion of the Pacific Ocean) and the Caribbean Plate (which includes both the Caribbean Sea and most of the Central American isthmus), Nicaragua's volcanoes form a tidy line parallel to the southwest coast. When climbing Cerro Negro, we can actually see the ocean in the distance in front of us, with much larger volcanoes forming an imposing line to our left and our right, as far as we can see. 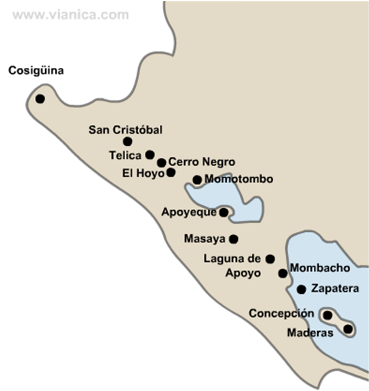 Many of the more important volcanoes are described in some detail on the volcanoes page at ViaNica, a site dedicated to the exploration of Nicaragua. I used the ViaNica map (copied above), in fact, as my guide when creating the Nicaragua Volcanoes quiz on PurposeGames. Study the page to learn what makes each of these volcanoes special, and then take the quiz to see if you can remember which volcano is where!

Posted by James Hayes-Bohanan at 12:37 AM