I have developed a terrible driving habit in recent years. When I notice another driver failing to blend with traffic, I look over to see whether they are chatting on the phone or texting. That is to say, I allow myself to be distracted by their distracted driving. More than half the time, if someone is drifting in the lane or driving 10 mph below the speed limit, it is because their brain is elsewhere.

Massachusetts typically ranked 49th in driving ability before we were able to bring our social networks and the entire Internet into the driver's seat. It is amazing that we could have such terrible driving without digital assistance.

As the cartoonist Wiley so beautifully illustrates in yesterday's comic, the desire to be distracted now extends to walking. This year my university campus has had some very complicated driving and walking patterns because of construction, but a high percentage of both walkers and drivers continued to move through the parking lots using only a minimal percentage of their brain cells. 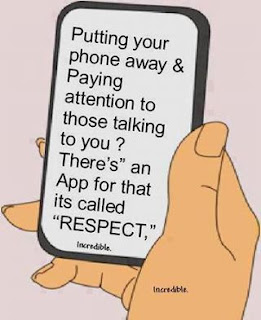 And that is just the problem -- most of the time, walking and driving do not require much of our brains, which crave activity. So we seek to fill the void with other kinds of engagement. This is why cars have radios, for example. The difficulty is that every once in a while, a driving or walking situation requires much MORE thinking, perhaps instantaneously. A ball rolls out into traffic, the car in front of us suddenly swerves, or a cliff opens up in our path.

If we are listening to a radio when this sudden shift in attention is needed, it is not a problem: our brain simply shifts attention to where it is needed for a second or a minute and then shifts back to the radio. I often have the experience, for example, of missing a key point in a radio broadcast because it comes just as my attention is needed elsewhere. The danger of social-media distractions is that politeness makes it more difficult to surrender that attention, and so we are more likely to keep our focus on the conversation when it is needed in the car or on the path.

The same applies in classes and business meetings, of course. The reason students -- or employees -- text when they should be listening is that sometimes the conversation in the classroom or meeting room only requires a few brain cells. If the professor or a coworker is saying something that we already know -- or that we think we already know -- we tend to reach for something else to do with our spare brain cells. If that something is a doodle pad or even a small puzzle, we can easily snap back to attention when called upon. But if in the palm of our hands we hold a connection to most of our friends and the contents of countless libraries, it is easy for our minds to be transported far from the space our bodies occupy. When called upon in such circumstances, we have no answers; our minds were elsewhere.

For these reasons, if our brain might be needed, the only safe dose for social media is no dose at all.

Lagniappe
Most people who watch the video above are likely to focus on the dramatic conclusion. I always look for the moment -- a few seconds before that -- when the instructor clearly loses his train of thought. Just as texting distracts other drivers who wonder why someone would type and drive at the same time, even the most subtle texting in class or a meeting will distract the speaker eventually. Some speakers soldier on, just as they might pretend to ignore a mosquito, but no speaker is unaware of the texting that goes on around them. For this reason, texting (even in one's crotch, seemingly out of sight) undermines the work of educators and other public speakers.

Beyond Lagniappe
We've recently been watching -- and re-watching -- a lot of Hitchcock, who had the luxury of predeceasing all of this foolishness. Still, his persona weighs in on the issue by way of this spoof:

Here is the real horror story: the students to whom I showed this did not understand it.