I knew that David Byrne was an avid cyclist and blogger, in addition to being the founder of the Talking Heads and in many ways the founder of world music as a commercially viable enterprise in the United States. I knew that he and I share a love for Brazilian music and I had thought that we both lived in Landsdowne, Maryland, though in different decades. According to Wikipedia, that shared hometown was actually Arbutus -- separated by 15 years or so, which is one reason we never met. From that same font of truths I also learned that he and I are both Scottish (more on my Scottishness coming to this blog on Friday, June 1), though I missed meeting him there by about ten generations.

Our paths did eventually cross at the Wang Theater one Halloween night almost four years ago, though his memory of me is probably not as vivid as my memory of him and his exceptional musical companions.

Today I learned from fellow geographer extraordinaire Jeff Anzevino -- himself a renaissance person who helped to create the bike-able Walkway over the Hudson -- that Byrne is really in many ways a geographer. In a New York Times op-ed piece last week, Byrne extolls a new bicycle sharing program in The City: This is How We Ride, he writes. He goes on to explain -- both in his article and in the accompanying video -- the environmental, social, artistic, and even mental-health benefits of widespread biking. He provides a quick survey of the many approaches cities around the world have promoted bicycling -- celebrating some accomplishments in the United States, but making it clear that we are far from the most developed country in the world in this arena.
His cogent geographic thinking is along two lines. First, he understands the importance of cartography -- especially modern, digitally-enabled cartography -- in supporting bike-sharing. Second, he deftly explains the feedback loops that allow a small bit of traffic replacement to become a substantial, even dominant contribution to traffic replacement. Enough bike lanes and bike parking, and we can eliminate space dedicated to automobiles.

His article is very timely for my campus at Bridgewater State University, where collaborative research centered in our Movement Arts, Health Promotion, and Leisure Studies program is leading to a very serious expansion of bicycling. At the same time, our Department of Geography has brought back a dedicated course in cartography, with campus mapping as the first major project, and is as I write in the process of acquiring cutting-edge tools for distributing maps online.

Incidentally, when I downloaded a copy of the aforementioned video -- which really is quite worth watching -- I noticed something I see as ironic, given Byrne's message about bicycling in order to become deeply connected to one's surroundings. The RealPlayer download screen actually encourages deeply distracted automobile driving! See the bottom line of the screen below: 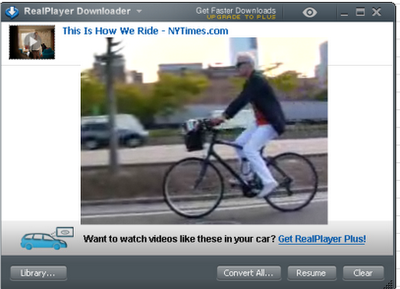 Posted by James Hayes-Bohanan at 4:06 PM