My first visit to the Southwest was as part of an almost madcap journey from Annapolis to Ensenada, by way of Los Angeles on the way out and Tacoma on the way back -- 8,500 miles in 17 days, never exceeding 62 mph in the 1960 VW my friend Mike -- a fellow undergrad in geography -- drove mostly at night to avoid overheating. From midnight at Four Corners to the following midnight in Needles, the time we devoted to the great deserts was hardly adequate.

My second journey was just a few years later and also with fellow geography students, this time the bulk of my graduate cohort at Miami University. That is in Ohio, of course,  Our department encouraged us to attend the annual meeting of the Association of American Geographers when it was held in Phoenix in April 1988. This was in the days before universities would pay to fly students, and for some reason vans were not available. We somehow managed to rent two comfortable sedans -- new Oldsmobile Delta 88s -- for the occasion. These were local rentals, but with unlimited mileage.

We somehow pushed ourselves to get to Denver by evening -- slightly out of the way, but I had a beautiful calendar in my office with a photo that was helping to determine the route. Despite white-out conditions on the Front Range, we pushed through to Moab, entered Arches National Park through an unattended gate, and positioned ourselves to see the sun rise at the very arch I had shown the others on my calendar.

I have some lovely, old-school photos that perhaps I'll be inspired to digitize now that I am revisiting this journey. We very much enjoyed the sunrise and the park, and as budget-conscious graduate students, were not sad that we had missed the chance to pay admission. We very much enjoyed seeing the mule deer on our way in as well! We zipped down to Phoenix, a couple of days there more than doubling my desert experience.

My third visit to the Southwest was a bit more extensive, as my wife Pamela and I moved to Tucson for graduate school. Having kept our noses to the proverbial grindstone for most of our time in Ohio, we were determined to get to know this place a bit better, and did manage to explore much of Arizona and a bit of the rest of the West while we were in residence in the early 1990s.

We recently had the privilege of reconnecting with writer Tom Miller, from whose work I had learned so much about the Borderlands and Cuba. Since his visit to Bridgewater, I read Revenge of the Saguaro, his eclectic and delightful collection of essays about topics both new and familiar.

Miller's exploration of its New Mexico setting inspired me to watch The Milagro Beanfield War for the first time in many years, and to share it with students in my summer class on Latin America. His chapter about Edward Abbey reminded me that I had somehow gotten out of Arizona without actually having read Desert Solitaire, which is part memoir of his time as a ranger in Arches and part call-to-arms for the protection of public lands in the West. 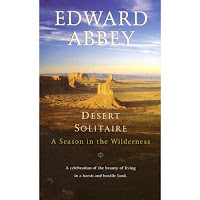 In many ways, this 1968 work is the Bible of the Southwest environment, and I was like a church-goer who absorbs a good bit of scripture through osmosis. When I finally started reading this remarkable work last week, it was immediately familiar. That sensation arises in part from my own time spent in similar landscapes, but is more importantly related to his masterfully conversational writing style and most of all an indicator of how deeply he effected many of the people I had the privilege to know and study with during my Tucson days.

When he first arrived at the Park -- it was then still a National Monument -- Abbey was given responsibility for a truly astounding amount of territory, and supplied with a modest vehicle and a more modest trailer. He was worried about mice in the trailer, but not for the reasons I would be. He understood that mice would attract rattlesnakes, and his fears were realized early one morning as he sat on his doorstep and noticed one just behind his bare feet. What to do?


"There's a revolver inside the trailer, a huge British Webley .45, loaded, but it's out of reach. Even if I had it in my hands I'd hesitate to blast a fellow creature at such close range, shooting between my own legs at a living target flat on solid rock thirty inches away. It would be like murder, and where would I set my coffee?"

I admire the sincere depth of his ethical ruminations, the patience and cleverness that get him out of this particular pickle, and of course his devotion to my favorite beverage -- though I have no illusions that his coffee is organic, ethically traded, or even palatable.

Note: The title of this post is a play on another environmental work that I did read; in fact Encounters with the Archdruid (one word) was the very first environmental book I read, unless the "have dominion over the Earth" passage in Genesis is counted. As I mentioned in my Old River Control post over two years ago, I really should write something about that particular Archdruid and my encounters with him.

Posted by James Hayes-Bohanan at 2:24 AM