On the radio this morning were the latest updates from two terrible, ongoing stories. Innocent people lost life and limb in each case, and evil intent is to blame in each case. Victims deserve justice in both cases -- restitution for their horrific losses and retribution for those responsible. But justice is unfolding very differently, and the difference is geographic.


View Rana - Boston in a larger map
The first story had to do with the opening of criminal proceedings against of Dzhokhar Tsarnaev, who faces multiple charges for the April 15 attack on the Boston Marathon and the ensuing days. The charges for these murders and injuries include a variety of potential death penalties. The deaths and injuries cannot be made less terrible by money, of course, but it is notable that $61 million has been raised so far to provide some relief to victims and families.
The second story in today's news follows the fate of survivors of the April 24 collapse of the Rana Plaza garment factory near Dhaka, Bangladesh. In a dangerous industry with more than a century of abusive conditions to its discredit, this was the most grievous of all avoidable catastrophes, with over 1,000 dead. A victim who lost five family members, a leg and a foot has received $120 so far and has been promised $12,000 more. The difference in the financial toll of suffering will of course be vast between one of the world's richest cities and one of its poorest, but the contrast is nonetheless jarring.

More important than the gap in compensation, perhaps, is the gap in retribution. The laws are not written to protect the innocent and punish those ultimately guilty in this case. Some local officials may be sanctioned, perhaps even severely, but as with the Molasses Flood a century ago in Boston, the financial pressure continues -- to build dangerous buildings and leave the risk to those living in and around them. 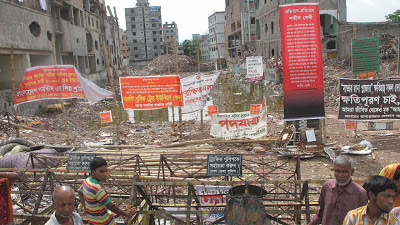 I need to be very clear about a few things that might otherwise be inferred from the foregoing. I do understand the difference between a deliberate attack with individual responsible parties and events that are the inevitable consequence of systemic actions. I also certainly do not begrudge the bombing victims in Boston the funds they have received -- my family has even contributed.

I would be equally willing, however, to support a set of economic rules in which nobody has to risk life, limb, or starvation to make the things I wish to buy.

Posted by James Hayes-Bohanan at 10:46 PM