"Not all who wander are lost"
~~ J.R.R. Tolkien, linguist, author, and honorary geographer

I have often said that if you enjoy being lost, you should travel with geographers. It works especially well if we are in a van. Last year four of us -- with three GPS units -- got lost going to a school we had been to before. But we learned so much local geography along the way, so we considered it a win.

Keeping in mind that regions are to geography as gravity is to physics: understanding regions is what we do, it is fascinating that this is what we have come up with.

I have been in all of nine of these regions, and have taught or studied geography in five of them. I first noticed something odd the first time I was involved in hosting one of the regional meetings. Professor George Strait had something to say about this --

That's right: I was leading field trips in the Arizona desert for a meeting of the Pacific Coast geographers. The excuse, I heard, was that two of the professors in my Tucson department enjoyed going to meetings in Hawaii as often as they could. I guess their pals in Nevada and Idaho felt the same way.

But that is not nearly all. From Arizona, I moved to Texas (about 100 miles south of George Strait's ranch, btw), where I attended a meeting of the Southwest AAG. The inclusion of Texas made sense, and I had already given up on Arizona, but Arkansas and Louisiana? I don't think so.

Some of the regions do make sense: Great Plains/Rocky Mountains is not a succinct name, but anybody who sees the name would know what states are included. Similarly, the subdivision of the former Great Lakes division makes sense, because there are so very many geography departments there. I am pretty sure there are at least two places to get a Ph.D. in geography in each state within each region. So the split makes sense, and although "Midwest" would have been a more conventional choice for a name, "Lakes" sounds nice, and it would have been quite messy to have "West Midwest" and "East Midwest." So we geographers did well with the middle of the country.

Back to the oddities, proceeding counterclockwise. At first glance, the Southeast makes sense, until we realize that it includes West Virginia, a state formed in 1863 precisely to get some parts of Virginia out of the south. We made the big time with this -- Wikipedia points out that AAG and the Census Bureau classify West Virginia this way, in its discussion of all the regions to which this state is sometimes assigned.

Next comes the Middle Atlantic division, which includes the place where I became a geographer (UMBC in Catonsville) and where I became a person (the erstwhile Columbia Hospital for Women in D.C.) There is nothing really wrong with this region -- it is in the middle of the Atlantic coast of the U.S. But it seems rather small -- just a state plus a city that used to be part of the very same state. It is a maritime state, but not so much on the Atlantic side. It has about 150 miles of Chesapeake Bay coastline, but only 31 miles on the Atlantic Ocean.

Next come the Middle States, crammed almost as far into the northeast corner as states can be, and actually bordering Canada!

Finally, our own NESTVAL -- both a division of the AAG and a separate, older society of its own: The New England and St. Lawrence Valley Geographical Society (whose annual meeting I am missing this weekend, for only the second time in 20 years). "Where is the St. Lawrence Valley?" a student asked me yesterday. "Not on this map," I replied.

I was once the newsletter editor for NESTVAL, a position for which I volunteered because I was pretty good at putting together a decent-looking publication. I am not, however, any good at keeping track of membership lists in ambiguous circumstances, and so I failed spectacularly at the newsletter mailing list. Members of the other 8 divisions are simply the AAG members with mailing addresses in those divisional boundaries. NESTVAL membership also includes those who are AAG or CAC-ACG with addresses in certain parts of Canada, plus anybody who simply decides to show up and pay NESTVAL dues. So although NESTVAL looks like an area on the map of the United States shown above, it is much more like a state of mind.

So anybody needing to have regions drawn, feel free to call on us professionals!

One fellow geographer who read this decided to look for other regional schemes. He was pleased to find that the regions used for reporting purposes in the National Climate Assessment (which as of this posting is still available to the public, despite the current project of silencing government scientists -- but that is a subject for another post) follows a pattern more familiar to the general public.
Another geographer recently shared this map of the United States, if it might look if a professional design team had been consulted.
Lagniappe

Regionalization is an equally fraught term as it applies to municipal government in Massachusetts -- home to 351 cities and towns, with an unknown number of school districts! 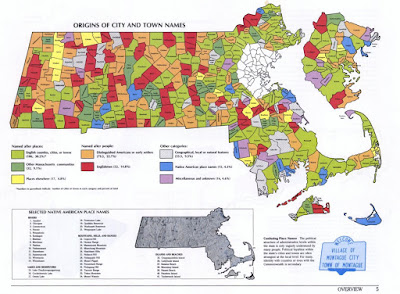 Posted by James Hayes-Bohanan at 10:21 AM