I started this blog post just after Hurricane Maria made landfall, as it became clear that an unprecedented onslaught of back-to-back major hurricanes was to be compounded by unprecedented neglect of a natural disaster on U.S. territory.

I heard the phrase "open-ended crisis" in a discussion on National Public Radio, as I began to gather links and to write. As I kept a growing number of tabs open on my Mac, this post grew in length and complexity -- and somehow I eventually lost all of that writing. I did manage to keep most of the links that I had found most instructive, though, so I am going to share them here with minimal commentary. Unfortunately, they are going to be relevant for a very long time to come.

For U.S. mainlanders who do not know much about Puerto Rico -- which is to say, most U.S. mainlanders -- I highly recommend the 2006 film ¡Yo Soy Boricua, Pa'que Tu Lo Sepas! (I'm Puerto Rican, Just So You Know) by the comedienne Rosie Perez as a starting point. It is a personal journey of discovery for her and some of her family members, who themselves did not know some important elements of the relationship between the United States and its biggest colony. The film is on Netflix DVD only, and on YouTube (above).

And now some print and radio links. Where possible, I lead with the names of the journalists involved, because they are an essential and maligned element of our democracy.
First, about the storm before the storm:

And then the storm itself

Brian Resnick and Eliza Barclay on Vox: What Every American Needs to Know About Puerto Rico’s Hurricane Disaster

David Ferguson, Raw Story: ‘Stop the genocide’: San Juan mayor begs UN and UNICEF for help Trump won’t give Puerto Rico. The word "genocide" should never be used lightly, but this situation is far from light, and if this were taking place in any other country, it is exactly the word we would be using.

Jenna Johnson, Washington Post: Many Trump voters who got hurricane relief in Texas aren’t sure Puerto Ricans should. This article describes a Texas couple who split their vote in November, and who have split opinions now. They both benefited from a $14,000 FEMA check, despite having no flood insurance. But along party lines within their household, one thinks that Puerto Rico deserves more help and the other thinks they should not.

Shannon Collins, U.S. Department of Defense News: Puerto Ricans Represented Throughout U.S. Military History. I sought out this story after reading the president's audacious claim that the DoD would be leaving the island soon. Not only does the DoD have permanent bases on the island, we learned from Rosie Perez that Puerto Ricans are among the Americans most likely to serve in the military. In fact, the Commonwealth status was contrived in part to make sure that Puerto Ricans could serve in World War I. It is dastardly to even mention the possibility of removing troops from the island while its people are still dying.

Michael Tackett, New York Times: An Exodus From Puerto Rico Could Remake Florida Politics. Denial of statehood to Puerto Rico has been entirely driven by partisan politics, so it is interesting to contemplate how the extreme mistreatment of the island's people could have unintended consequences for the political balance.

Corinne Segal, PBS Newshour: Volunteers are helping Puerto Rico from home, with a map anyone can edit

To end this with something positive, I include my photos from my family's first visit to Puerto Rico, which was in 2016 and Help for Puerto Rico, about a former student of mine who worked with his friend and colleagues to bring help directly to some of the people of Puerto Rico. 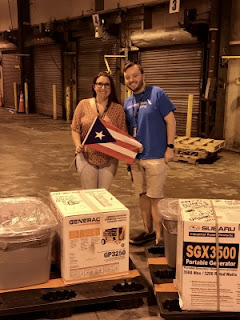 Unfortunately, I can no longer end this post on a positive note. On September 12, 2018 -- as Hurricane Florence is ready to make landfall in the Carolinas -- the President of the United States made the following statement:
This contains an impressive amount of error in a minimal number of words, which would be laughable were it not so dangerous. It is to be hoped that nobody in the Carolinas takes the bragging seriously.

Rick Santorum acknowledges the shortcomings of FEMA while simultaneously blaming Puerto Rico and misidentifying it as a country:

Posted by James Hayes-Bohanan at 2:28 PM