I am not a librarian -- not nearly well-organized enough for that -- but I have picked up a lot of librarian values from three decades spent with a librarian who is not only an extraordinary practitioner of the bibliothecary arts, but also a scholar of knowledge itself. Lately, her scholarship on information literacy in general has led her to collaboration on empirical research into the "fake news" phenomenon in particular.

That jarring phrase has also had the attention of the Massachusetts Foundation for the Humanities, which decided to devote its Annual Forum to the topic this year. This turned out to be a perfect date for a geographer and librarian, especially since the forum was to be held in the Boston Public Library!

The event was entitled What's New About Fake News?, and was in the form of a panel discussion, with journalist Sasha Pfeiffer (of both the Boston Globe and WBUR) serving as moderator. The panel was very well chosen -- and would no doubt have been even more compelling had Professor Jelani Cobb not needed to cancel.
The discussion was wide-ranging, with insights both alarming and constructive. I was grateful for the many new ways of thinking about our current predicament that the panelists and moderators shared, and even for most of the comments and questions from the audience. It was information scholar Claire Wardle, however, who gave us the most readily applicable ideas for beginning to work our way out of the impasse that has been created by dangerous levels of disregard for facts and distrust of sources.

First, even though the phrase "fake news" was in the title of the day's program, she admonished listeners and fellow panelists to avoid using the phrase altogether, and after a couple of missteps, they actually managed to do so. Referring to the "weaponizing" of communication strategies, she asserted that the phrase "fake news" is used primarily to attack journalism, so journalists should refuse to participate in their own denigration by using it.

Rather, she said, since the term can be used to refer to several VERY different kinds of messages, we should simply indicate which kind is being discussed. To whit:
By framing the concept in this way at the very beginning, Wardle helped the entire panel to speak with greater precision about the new ways in which information really is being manipulated.

The "takeaway" from this part of the discussion is that any time we see the phrase "fake news," we should try to assign it to its proper category; this will help us to understand what is worth sharing and what is worth getting alarmed about.

Which leads me to Wardle's second, perhaps more important suggestion. As someone who has worked on social-media campaigns at a very high level, she understands both how erroneous information gets propagated and the harm it can do. She suggests two ways of fostering what she describes as "emotional skepticism" and that I think she intends as safeguards within social-media operating systems. They can, for now, simply be seen as guidelines for individual users of social media.
I try -- but sometimes fail -- to do both of these things.

In response to a cogent question from the audience, the panelists discussed the opacity of the algorithms that are used to shape each person's newsfeeds and search-engine results. The major technology companies know things about us that we do not know ourselves, and they feed information to us based on those things they know. The ways in which both things are accomplished are opaque to the users, and all of the panelists argued that making these algorithms at least somewhat transparent would give us some defense against being manipulated -- either as individuals or entire electorates.

Until that day of transparency comes, I have a suggestion of my own. We do not know the details of the algorithms at work behind the systems we use, but we know that they all tend to reinforce confirmation bias. We are increasingly unable to understand each other because there is so little overlap among the things we read and listen to. It is up to us, therefore, to seek out information sources -- and people -- with as wide a variety of viewpoints as we can manage.

Pamela -- the librarian by my side at this presentation -- provides even more insight into the program in general and our responsibilities as readers in her post What's New About Fake News on her "Library" Books blog. She has also created an Information Literacy guide for our campus.

The more we know, the harder we are to fool. It was fitting that the MassHumanties director ended the program by encouraging us to draw on the expertise of librarians when trying to ascertain the veracity of something we are asked to believe.
I am reminded of the words of Congressman John Lewis, as I quoted him on this blog almost a year ago and share regularly with all of my students:

Just Read
Update 2021
Reading this in March 2021, I noticed the phrase "current predicament" near the beginning of this post and found it quaint. Near the end of the first year of the 45th presidency, I could not guess how much worse many aspects of this problem would become. The profession of journalism was attacked with greater ferocity, and U.S.-based journalists began to experience real danger. 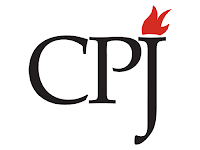 I am convinced that neither the June 2018 mass murder at the Capital Gazette (in which my brother lost two friends) nor the execution of Jamal Khashoggi in October 2018 would have happened if not for the misuse of the term "fake news" described above.
Although journalism has long been a dangerous occupation in many parts of the world, serious threats have become widespread only recently in the United States. I now regularly support the Committee to Protect Journalists, which I should have started to do before its work became so urgent in the U.S. context.

Posted by James Hayes-Bohanan at 12:56 AM