Today it was reported that Vice President Pence "had to" break a tie in the Senate. Years after financial companies drove a thriving U.S. economy into the proverbial ditch, rules were about to take effect that would allow citizens to file class-action lawsuits against financier malfeasance. 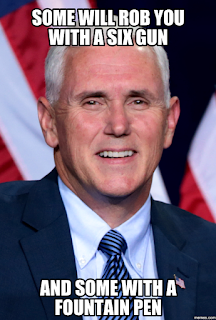 Far from serving the public good, V.P. Pence put his thumb on the scale of justice, in favor of the unjust. (Sorry for the mixed metaphors.)

The action, of course, brings Professor Woodie Guthrie's famous words to mind. To an ordinary person, a bank is at least as dangerous as a bank robber.


Posted by James Hayes-Bohanan at 7:45 PM