We Cannot Negotiate With Nature

The physics of climate change are not interested in the opinions of humans.

This is what Danish Climate and Energy Minister Dan Jørgensen had in mind when he made the statement I use as a title above. In an interview with the BBC, he was explaining the very bold policies his country is employing in order to reduce its greenhouse emissions. Some of these approaches also have economic benefits, but he makes it clear that they will operate some utilities at a financial loss if necessary.

The interview included both the political leader of Denmark and the CEO of its largest company, the shipping giant Maersk, which moves one fifth of the world's trade. He described how the company is planning to make all of that transportation carbon-neutral by 2050, and how it has already begun to accelerate those plans. The first carbon-neutral cargo ship will be on the water in 2023, with eight already on order.

The finances are negotiable; the atmosphere is not.

Their sense of responsibility is in sharp contrast to that of investment bankster Roberto de Guardiola, whose $10,000,000 yacht Highlander was berthed for a couple of months recently near my club's much more modest vessels in New Bedford. 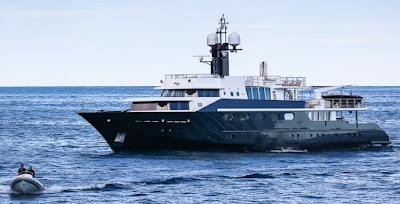 I was reminded of this yacht -- called a super yacht because of its size and cost -- when listening to another person in the same BBC program -- Selina Leem of the Marshall Islands, which is the country where this yacht happens to be registered.

The yacht called Highlander is registered in Bikini, M.I. Perhaps de Guardiola chose that port in part because he enjoys the excuse to have a name that sounds sexy painted in huge letters on the stern of an otherwise unadorned vessel. If he is aware of the calamities inflicted on the small archipelago by the United States, it does not stop him from claiming the name. Nuclear testing erased some islands and left others with a legacy of poison. None of this matters, of course, since the islands were chosen strictly for the "convenience" of lower fees and looser regulations that the super-rich often prefer.

Selina Leem is an activist and one of just 60,000 residents of her country, which is found entirely on low-lying islands and atolls. I have written about the vulnerability of similar archipelagos in Climate Attack and other posts, but her first-person account of the multiple perils of rising seas is well worth hearing, as is her conversation with the program host about the reasons she would rather combat climate change than abandon her country.

This conversation was just a sample of many events that were taking place in and around Glasgow in the days leading up to the most recent global climate negotiations. As I posted in Delaying Justice, the main negotiations offered some progress on some of the unmet goals (read: unkept promises) of the previous round of negotiations in Paris. It is of some use to have heads of state make commitments to future targets, but it is increasingly clear that Greta Thunberg and others are correct in insisting that we need much bolder action than COP26 could provide.

The participants in the BBC interview cited above (which I recommend taking the time to hear in its entirety) were in Glasgow at the invitation of TED as part of an ongoing effort called COUNTDOWN that is putting into action exactly the idea suggested above. Never has the adage of to think globally and act locally been more important. We can press our political leaders to do the right thing at a global scale, but we must also do the right things ourselves countless ways that will never be part of the COP proceedings.Lagniappe

The world desired by the Guardiolas of the world and the politicians they rent: 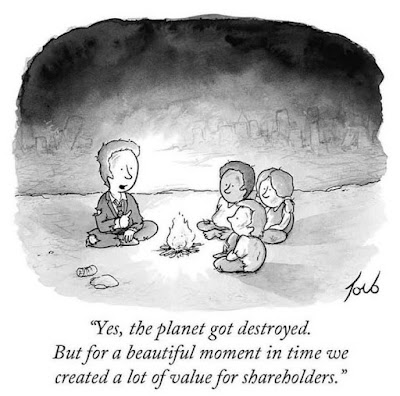 Posted by James Hayes-Bohanan at 1:13 PM