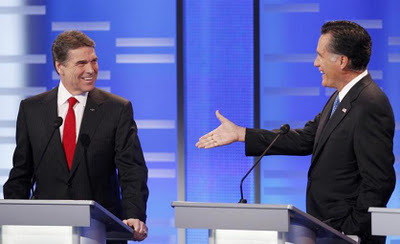 I'll bet $4.81 that Mitt Romney wishes he had not suggested a bet to rival Rick Perry in a recent debate. As reported by Glen Johnson, when trying to make a point about his record on health care, he suggested a bet of a particular size -- small enough to be taken seriously, but big enough (for Rick Perry and most of the rest of us, anyway) not to be entered into lightly.

On one hand, Rick Perry should have taken the bet, as Romney was putting bravado ahead of evidence in defending one of his many reversals on health care. On the other, he was correct to demur at the amount, especially since this revealed him to be a bit closer to the average audience member than is his challenger.

Just George H.W. Bush revealed his status in the stratosphere of privilege through his fascination with grocery scanners -- he had never heard of them before a grocery-store tour during his campaign -- Romney has revealed his distance from the average American by suggesting this wager.

Based on the latest figures I could see for median net worth, his $10,000 bet would be equivalent to a $4.81 bet by a person of median net worth. (The mean net worth is much higher, since the numerical space below $102,200 is much narrower than the space above it.) As my favorite librarian has often observed, "The problem with rich people is that they don't understand that poor people don't have money." Next to Mitt Romney, almost all of us fall into that "poor people" category.

And by the way, I lied in the first line of this post. Like Rick Perry, I don't bet. And like Perry, I know that most of the evangelical right doesn't bet, either.

Posted by James Hayes-Bohanan at 8:18 PM