The Invention of Necessity 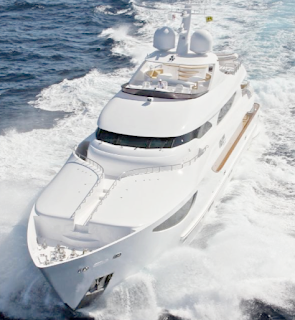 I rely on my students to bring me the best lessons, and today a student from South Africa -- where yacht-building is a big part of the economy, by the way -- sent me an advert (as they are called in those places that speak the Queen's English) that seemed at first to be a parody. 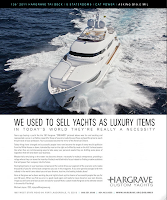 I checked the link in the ad, however, and either this is an elaborate ruse or Hargrave Custom Yachts in Ft. Lauderdale really did create it. Hargrave -- which has the chutzpah to use a non-profit *.org address -- has really taken a surreal turn by arguing that such yachts are a necessity. A necessity!

In addition to providing jobs for the boating industry, the yachts provide a means for entrepreneurs to escape from "every two bit politician" [sic -- Hargrave apparently could not afford an English major to hyphenate that compound modifier] who might try to shut down their business or tax their self-made wealth.

The yacht shown, incidentally, is being offered for $19 million, which would buy my entire middle-class neighborhood. A single fill-up of its fuel tanks would cost about as much as my car, and would allow me to drive it around the world -- with a heavy foot -- four times!

This copy was written at a time of record-high wealth concentration and record-low (for the past half-century, at least) taxation. It is a valuable insight into the spirit of entitlement among the super-rich who really feel their wealth arises entirely from their own hard work and brilliance, not realizing the extent to which they depend upon market manipulation, the toil of the poor, and someone else to bear the cost of their pollution.

Posted by James Hayes-Bohanan at 7:30 PM