Today in my Geography of Latin America class, we read a report from the Council on Hemispheric Affairs entitled The Price of Civilization, which the impact of large-scale resource developments in Brazil, Chile, and Bolivia.

Below are some quick links to what they found, posted here primarily as a way to facilitate our discussion later this week.

Brazil
Map from Coastal Care
Square Kilometer - Acre Converter (useful for all sections of the article)
Defending the Rivers of the Amazon (a GoogleEarth 3D movie with narration by Sigourney Weaver)
Another map:

Rendering of the dam itself: 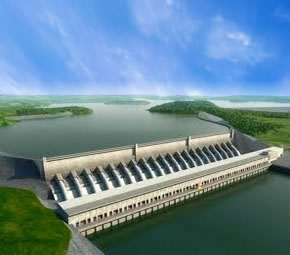 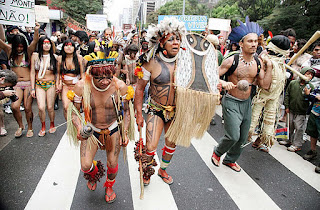 Chile
Map of Chile
Anger over proposal, reported by BBC in May 2011
Court suspension of project, reported by BBC in June 2011
BBC maps of proposed dams
Patagonia's Rivers at Risk
Project map from Glacier Change
Damming Patagonia: Simply Concrete? from Pedal for Change

Using these images and maps as a starting point, I then asked the students to answer questions about where the projects themselves and the benefits and dis-benefits are likely to be located. From the answer to the locational questions, I hoped that the students would find their way to interesting discussions of how and why questions, and from the preliminary conversations, it seems to have worked!

As we left class, I gave students a copy of "What a Difference a Century Makes," my contribution to a collection of essays about the Amazon region published in Brazil nearly a decade ago. In it, I invite the reader to compare frontier developments of the twentieth century -- which we sometimes find morally dubious or even horrific -- with those of an earlier time much closer to home.

I will also speak of a specific example of a hydroelectric plant I visited in the western Amazon. It is in the Municipio of Candeias do Jamari (shown below). I should not have been surprised that this town -- whose population I saw explode between 1996 and 2000 -- now has a blog!

Garrett Hardin's influential and controversial 1968 essay The Tragedy of the Commons may provide some insight into the trade-offs between individual and universal costs and benefits.

Posted by James Hayes-Bohanan at 8:21 PM