SPOILER ALERT. This is an article about two terrific films, each of which connects coffee to political economy. My best advice is to watch them (you will not regret it) and then perhaps read what I have to say. That said, in the comments below, I will refrain from giving away the details of the fictional work.
The films discussed are The Girl in the Café (HBO feature film, 2005) and  Black Gold (documentary, 2006). Viewers of both films should watch (and carefully listen) through the end of the closing credits. 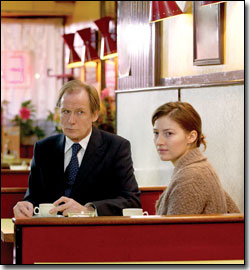 For some reason, I learned about the 2005 film The Girl in the Café only recently, during one of my frequent searches for films related to coffee and anything related to coffee shops or to the romantic side of coffee. Kelly Macdonald (Gina -- a young woman, not a girl) and Bill Nighy (Lawrence) bring all this and more to a film that works on many levels, so I am glad finally to have found it.

The first level is a nerd-meets-nerd romantic comedy, heavier on the romance than the comedy, the romance unfolding at an excruciating pace. From a chance meeting in a crowded London café, the May-December couple tip-toed around their mutual attraction until our DVD timer read 54 minutes before the first kiss. By then I was yelling at the screen like that old man next door in It's A Wonderful Life.

As the pair moves toward resolution of the film's romantic tension, a deeper tension emerged, along with the film's real purpose. Lawrence is a British finance official who is part of his country's negotiating team at the 2008 G8 meeting. For the purpose of the film, the meeting was chaired by the United Kingdom but held in Reykjavik. The 2008 meeting was actually held in Scotland, but it was indeed chaired by the UK.

The G8 meetings are gatherings of the heads of state and finance ministers from eight large countries (known as large "economies" for the purposes of those who view the world primarily in economic terms). Since 1975 (when they began as a G6 meeting), these meetings have been a place where a small roomful of heads of state make commitments on finance and trade policy that have profound implications for all the people on the planet. For the past decade or so, the summits have made rhetorical commitments to improvements in the lives of poor people -- promising to reduce the number of childhood deaths related to malnutrition, for example. They are part of a similar cycle of summits in which economic power tends to be consolidated while democratic power becomes increasingly peripheral.

In the film, this is signaled as the couple's romantic getaway passes transitions from the awkward moment with coworkers at the airport to the gradual realization of their arrival in the security bubble. It is at this moment that viewers of another coffee film will begin to notice parallels. As in the 2006 documentary Black Gold, our introduction to the meeting of the most powerful people on the planet is the revelation of the police and military power used to keep ordinary people out of the meeting.

And young Gina's accidental status as an ordinary person inside this extraordinary security bubble becomes the central conflict of the film. As reviewer Alessandra Stanley so aptly describes her role, the young girlfriend is the id of both a member of the negotiating team who usually divides his humanity from his profession and of the screenwriter, who wishes that his film could transform politics in the way that the character he created does within the film.

Clearly, it has not happened yet. And the 2008 presidential election has not changed the behavior of the United States in such settings. In both The Girl and Black Gold, negotiators give lip service to humanitarian goals, while arrogantly insisting that the free-market absolutism will have better results than actual changes improvements in aid, debt, and trade for impoverished countries.

I conclude this post with an example that arrived in this week's mail. Among the varied excerpts in the September issue of Harper's magazine is a piece described as Editing and entitled Brazil Nots. It shows the changes that President Obama's representatives at the June 2012 Rio+20 conference requested to a summit declaration entitled "The Future We Want." Some of the changes are more subtle than others, but all reveal a stronger commitment to ideological purity than to tangible results for the world's poor. (Bold words are additions; strikethroughs are deletions. I have put the entire excerpt in italics)

Eradicating poverty is the greatest global challenge facing the world today and an indispensable requirement for sustainable development. In this regard we are committed to free humanity from extreme poverty and hunger as a matter of urgency.

We recognize that promoting universal access to social services can make an important contribution to consolidating and achieving development gains.

We strongly encourage initiatives at all levels aimed at providing enhancing social protection for all people.

We appeal to invite all States, relevant international organizations, the private sector, and all major groups to enhance their efforts to achieve sustainable changes in consumption and production patterns while creating new economic opportunities and decent work, and securing good enhancing living standards and protection of vulnerable groups.

We reaffirm the urgent need to deepen the reform of the global financial system and architecture based on the principles of equity, sovereign equality, independence, common interest, cooperation and solidarity among all States.

We urge developed countries to undertake significant changes in the lifestyles of their people to move towards a more sustainable future for all. 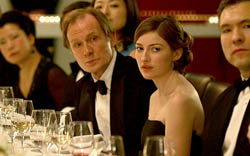 Each of these paragraphs is from a different part of a 53-page document. A quick perusal of the final draft document suggests that the Obama Administration got some but not all of the changes is requested. Having seen both Black Gold and The Girl in the Café, I can easily envision the negotiators justifying each of these changes, and I would love to see Gina take these characters down!

Posted by James Hayes-Bohanan at 5:14 PM

Email ThisBlogThis!Share to TwitterShare to FacebookShare to Pinterest
Labels: Girl in the Cafe