Naturalist John Muir once said, "When we try to pick out anything by itself, we find it hitched to everything else in the Universe."

His lesson is being learned in my own region, where headlines every day clamor for aerial spraying of mosquitoes to combat Eastern Equine Encephalitis (EEE) -- until today, when the headline in the local paper complains that we have too many bats, in part because mosquitoes (their main diet) have been killed off ... not enough mosquitoes!

Dr. Michael Miller's graphic illustrates a similar concept in an entirely different context. Writing about innovation in the funding of health care, he uses this illustration to describe the interlocking "gears" of the environment in which such innovations would be introduced. A strictly mechanical interpretation suggests paralysis, but an ecological interpretation might suggest that movement is possible, though consequences could be difficult to predict. 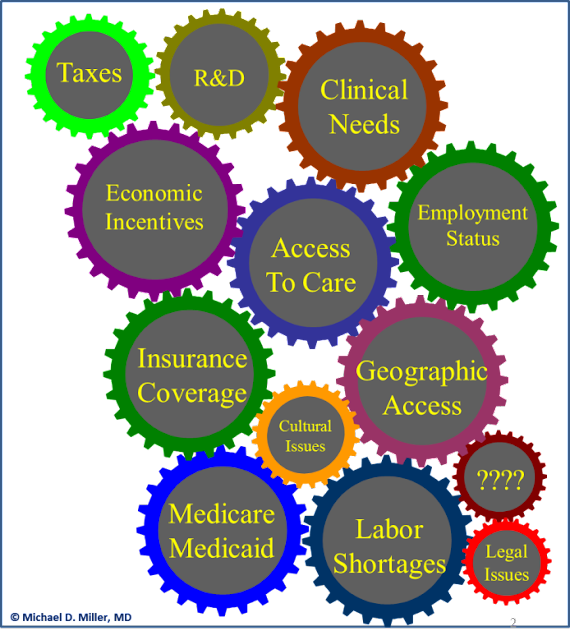 As much as I like this graphic in general, I am even more pleased that Dr. Miller recognizes a "gear" that is too often forgotten: geography. Medical geography -- whether it relates to service provision, health status, or disease transmission -- recognizes the importance of place in the subjects it studies.

Whether recognized or not, geography is a "gear" in almost every facet of life.

Posted by James Hayes-Bohanan at 4:20 PM