During the first eight years of this century, the president and vice president of the United States were oil tycoons, so their denial of climate science was not surprising. Those who were paying attention became increasingly convinced of the role of fossil fuels in changing the climate, but paying attention was somehow optional.

In this election year, however, ignoring the evidence requires extraordinary will. Unfortunately, these three men share a great capacity to ignore a climate story that is no longer about the future, but about the very immediate present. Rhetorical differences may distinguish President Obama from Governor Romney somewhat, but neither of them is any more likely than Chinese Premier Jiabao to act on what most people in the United States can see so clearly.

It is dry. Most of the United States -- and especially many parts that are normally dry -- are experiencing drier than normal conditions. According to the U.S. Drought Monitor, some of the driest regions are experiencing the greatest deficits. The region overlying the Ogallala Aquifer has been drawing down surpluses that accumulated more than a hundred centuries ago, and its dependency on water from the last Ice Age continues to deepen. 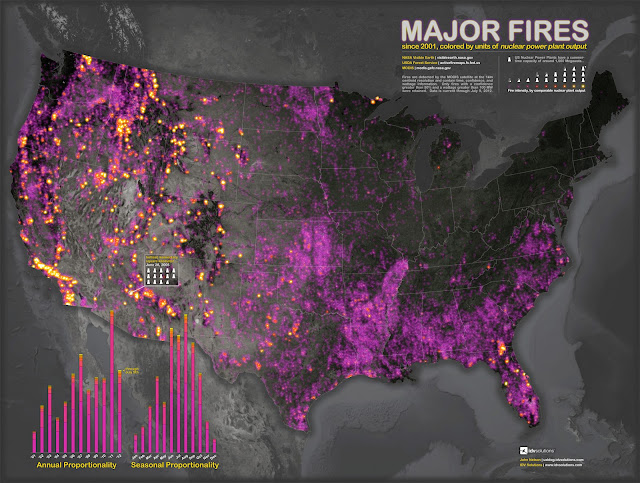 Fires are raging. Forest fires have increased in recent decades in large part because of the unintended consequences of suppressing fires throughout most of the twentieth century. Fire response was so successful that a matrix of forest with uniformly heavy fuel loads emerged throughout most of North America, with serious and sometimes catastrophic results. That's right: Smokey the Bear has made forest fires much worse!

This is an example of an environmental problem whose effects are compounded by climate change. Whatever the causes of greater fire prevalence, the consequences are even more severe than they otherwise might be. As reported on the Mongabay blog, cartographer John Nelson has mapped all major fires since 2001, and has shown an increase in intensity, with 2011 the most severe year of the decade, and 2012 poised to match or exceed it.

Records are shattering. With 118 years of record, it is possible to compare a given month to the same month in previous years, and to do so at the station, city, state, or national level. Temperatures were near the median of all July figures in several western states, and significantly above normal in a few more. But in most states, this was a top-ten or even top-five July, and a record-breaker for the contiguous 48 as a whole. See July 2012 on NOAA's State of the Climate page for more details.

This can be explained in only one of two ways. It could be that the 118-year period of record reflects randomly varying conditions. If so, a record month or unusually hot or cold month would occur at some frequency, a frequency that could be calculated in much the same way that the odds of finding a seven-foot-tall 10th grader could be calculated.

The second explanation is that the temperature records not only vary randomly, but also exhibit some kind of long-term trend. Some continue to argue that there is no way to know which explanation is correct. I am not a gambler, but I would love to play a little poker with someone who sees things this way!

This is a trend. As Bill McKibben details in his Rolling Stone article Global Warming's Terrifying New Math, we are already seeing changes -- in terms of sea ice and ocean acidity, for example -- that exceed "future" predictions of the effects of climate change.

Carbon circulates through many kinds of storage in Earth's systems, from the atmosphere to organisms to limestone to coal and oil. Our industrial age has been fueled by the removal and release of millions of years worth of fossilized carbon over just a couple hundred years. Since carbon comprises a very small percentage of the atmosphere -- 0.028 percent prior to Victorian times -- it should not have surprised us that dumping every drop we could find into the atmosphere should have increased that concentration by nearly half (so far).

It appears that heads of state will not admit the answer to the "Hot or Not?" question any time soon. Carlos and company, however, do provide the answer at the opening of "Smooth."


Posted by James Hayes-Bohanan at 1:13 AM