This line, uttered with vigor and prejudice but a dollop good humor, is a lasting memory of a brief encounter with a vestigial Southern relative ... vestigial in the sense that he had held on to his resentment of Reconstruction about a century longer than he ought to have.

The conversation went something like this, as I stopped by his home a couple of years before his passing, and a couple of decades after our most recent prior encounter:

Uncle: James, why did you go and marry a Yankee girl?
Pam -- speaking for herself: I'm not a Yankee; I'm from Maryland. That's south of the Mason-Dixon Line.
Uncle: (see above)

It is remarkable how often this brief conversation creeps back into conversations about boundaries of all kinds -- literal and figurative, racial and otherwise.

I was reminded of it yet again, as I was doing research on the geography of tea for my forthcoming book on the subject. It was then that I noticed an article about sweet tea on the Strange Maps blog, referring in turn to a geographic experiment on the Eight Over Five site. A rather simple methodology involving the availability of sweetened tea at McDonald's franchises in my home state of Virginia reveals a surprising consistent dividing line.

And were my uncle alive, he would be vindicated to some degree: both Pam and I grew up in Yankee territory, as defined by the tea. 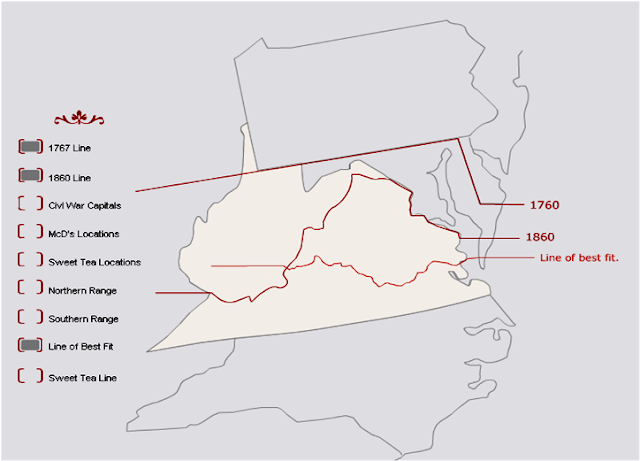 Posted by James Hayes-Bohanan at 11:24 AM