Last Thursday was a perfect day to enjoy exploring sites both new and familiar -- a wonderful afternoon and evening spent about halfway between our home and a very important errand in Toronto.

The first part of the journey was zooming along the familiar Massachusetts Turnpike (the driveway of my summer, as it turns out), exiting a bit earlier than usual to take I-84 into western Connecticut. Because I'm writing this, it is apparent that we survived passage through Hartford. In my experience, Hartford is a scary pocket of daredevil driving in Connecticut, which has by far the best driving conditions in southern New England. (This is like having the best swimming conditions in Hell, but I digress from my digression.)

As part of our Bridgewaters Project (the lifelong pursuit of places sharing the name of our adopted hometown), we wandered off of I-84, through horse country and into the bucolic (though recently somewhat sordid) village of Bridgewater, Connecticut (population: 1,824).

After a wonderfully surprising coffee-shop visit along Route 9, we came to the real highlight of our evening -- a visit with our friend Jeff Anzevino, a friend from our undergraduate days as geography students at UMBC. The Hudson River has captivated Jeff, who works as a planner for Scenic Hudson by day, sleeps in a cozy home high above the river by night, and takes masterful photos of its tugboats in between. Jeff lives about halfway between our home and the homes of our extended families, allowing us sporadic visits through which he has passed along his passion for this river.

On this particular visit, we trawled from bank to bank with Jeff and a fellow river booster, enjoying the fish, the trains, and the unique human and physical geography of the river and shoreline in the vicinity of Highland and Poughkeepsie. The most remarkable part of that view is the Walkway Over the Hudson, the result of  successful collaboration among countless visionaries in the region, Jeff not least among them. The abandoned railroad bridge whose pier is shown above now supports one of the world's highest and longest pedestrian bridges, a walkway that allows pedestrians to enjoy a view from the sky above a remarkable river. Moreover, the bridge greatly increases the ability of people to commute by bicycle, so that many people can now get across the river, onto a train, and into New York City or Albany without ever getting in an automobile. (Read more about the importance of this in my How We Ride post.) 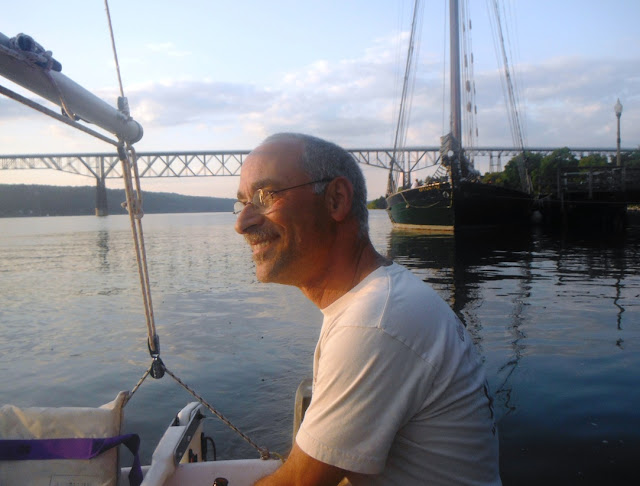 The bridge is visible in the background of this somewhat hazy photograph, along with a vessel that is itself another important facet of the river's story. Jeff's avocation as a musician connects him to a much more famous champion of this river: Pete Seeger, whose ship the Clearwater has long served -- quite literally -- as a vessel for environmental education along the Hudson. The converted coal ship was being tended at the of of a sailing day when we found it berthed in Poughkeepsie. 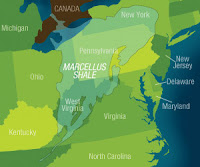 I am thankful also to my friend Hilary -- another geographer -- for pointing that proposed hydrofracking -- in the pursuit of supposedly "clean" natural gas -- is a threat to the Hudson River. The Marcellus Shale where fracking is proposed lies mainly outside of the Hudson River Valley. Pete Seeger and the Clearwater have been among those resisting the project. Formal regulatory comments from Scenic Hudson detail some of the specific threats, while Sean Lennon (yes, that Sean Lennon explains the threat to Pennsylvania and New York landscapes, and water supplies in those regions and New York City itself). Nearly 10,000 people have joined Hilary in the No Fracking Way group on Facebook, which continues to work to protect water and land from what would be the equivalent of a slow, massive spill underground.

A few years back -- before I had seen much of it up close -- I enjoyed the stories of the Hudson that begin William Least Heat-Moon's Riverhorse: A Voyage Across America. In some ways, it is like a riparian version of Zen and the Art of Motorcycle Maintenance. Read more about the Hudson in my Tappan Zee birthday post.

That errand, by the way? We were picking up our kid, who had been on a service trip to China with Me to We, a Canadian youth organization.

Posted by James Hayes-Bohanan at 1:01 PM