Through the course of this BSU Blogfest week, I believe I have pointed to all of the blogs to which I actively contribute: those of myself, my family, my department, and my community. I invite readers to “subscribe” to any of the blogs I mentioned over the course of the week, plus one I neglected to include: The Bridgewaters Project.

The Bridgewaters Project is a life-long blog on which my favorite librarian and I are documenting our explorations – literal and figurative – of every place in the world we can find that bears the name “Bridgewater.” So far, the journey has taken us from  a sleepy college town in Virginia to a microbrewery in Vermont, to one of the most important crime scenes in U.S. history (a mile from our house) and a pivotal location in the history of treating the criminally insane (four miles from our house).

I will finish the week by pointing out that a much larger body of online work has accumulated on my faculty web site – a sprawling entity of hundreds of pages that predates my service at Bridgewater. In the mid-1990s, I was teaching part time at a school known – really – as the University of Texas at Brownsville in Partnership with Texas Southmost College. (A few months ago I blogged about very disconcerting events at my former campus.)

Anyway, I had a day job in McAllen and taught one night each week at UTB-TSC to a group of about 70 students, many of whom walked to class from Mexico (hence the “southmost” designation). I noticed that a lot of my students struggled with the same issues related to writing. Since my home and my day job were about 50 miles away, I did not have a way of spending much time working on it with them. There was a new thing called the World Wide Web, however, and I was learning bare-bones HTML to create something called a web page.

I decided that providing writing tips for my students would be a good use, so I posted that, along with a few links related to the course subject – environmental geography. Eventually the writing tips grew into a whole section, and the links grew and grew. When I came to Bridgewater, I copied the pages to the new web server here, and they gradually grew. A year later, I finished my dissertation on the Brazilian state of Rondonia, and posted the whole thing on the web site. The writing tips grew into something I called the “Not the 13th Grade” pages, which continues to be read by students, parents, and educators throughout the world (120,000 hits and counting).  (And I learned that students everywhere – not just along the border – tend to struggle with a couple dozen common writing problems.)

In fact, because I was fairly early in creating an academic web site (getting a lot of my content online prior to the emergence of Google), searches for many of the key words in the previous paragraph still bring readers to my site, helping to connect with a lot of interesting people. I still maintain and develop the site – particularly the section of about two dozen pages related to coffee – but in many ways I have found blogging to be a better (and usually easier) way to share ideas with my students and broader audiences.

And now for the final question of the Blogfest week.  I thank Cindy Kane for her leadership in organizing this terrific experiment, and I invite readers to explore some of the other excellent blogs that have been part of it!
What do you think BSU will be like in 10 years? 25 years?

One thing I know is that these years will go by more quickly than I can imagine. In some ways, I feel like I just arrived, even though far more than half the faculty have arrived since I started almost 14 years ago! The first answer I have to these questions is that in 10 years I will almost definitely still be working here, though if I am working at BSU (or whatever it is called then) in 25 years, it will likely be on a part-time basis.

Name
I only thought of making a small joke about further possible name changes because of the ongoing attention to our name change last year, but the idea of future name changes actually suggests a serious question. Throughout the United States, public higher education receives an ever smaller proportion of its financial support from the public (that is: students pay more, even though faculty and staff do not make more). Even as politicians increase demands for “accountability,” they also reduce funding. (These are politicians of both major political parties, coast to coast. In fact, in “liberal” Massachusetts, support has been near the bottom and cuts continue apace.) If the political interference continues to increase and the financial support continues to decrease, a name change would eventually be called for, so that state colleges and universities can throw off the shackles of their overseers. In that case, a name like “The University at Bridgewater” would be appropriate, and all the regulatory ties could be cut. This has not yet been seriously proposed in New England yet, but many Midwestern universities are starting to explore such changes. It could happen here.

Languages
Back to something more concrete and realistic: In ten years, BSU will rejoin the ranks of respectable universities by requiring its students to complete at least two years of a foreign language. Our previous requirement of one year was not adequate, but rather than improve it, we eliminated it. By “we,” I refer to the faculty and administration working here at the time the new Core Curriculum (an otherwise excellent model for general education) was instituted. I do not, however, mean “we” in the sense of a change I supported. I was among a vociferous group of professors who tried in vain to combat the skullduggery that brought us to our current, untenable status: a global university that does not require a foreign language. I cannot imagine that this will remain in place for another 10 years. Because we do tremendous work in many languages throughout the world, it is only a matter of time before we restore our good name in terms of a language requirement.


On another front, I am not as optimistic, and it is here that I will finally reveal the connection to a Terry Gilliam film at which I have hinted for the past couple of days. The movie is the 1985 farce Brazil, in which the country of Brazil is never mentioned. It is a preposterous dystopia, in which the characters go to absurd lengths to cope with the implausibly picayune demands of a bloated bureaucracy. I had watched the movie a couple of times – searching in vain for some direct reference to Brazil: samba, Rio, anything – before I understood (I think) the point of the film. 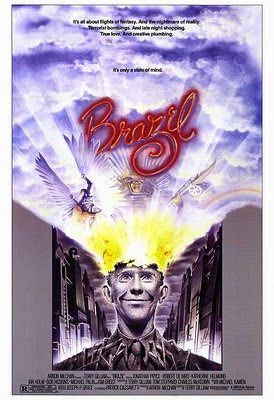 Terry Gilliam’s Brazil was produced in 1985, the same year in which Brazil’s military dictatorship collapsed. What had begun as a more conventional military dictatorship in 1964 (which then “hardened” in 1967) eventually became a bureaucratic regime of ever-increasing complexity and – ultimately – paralysis. Whenever someone found a way around a rule, a new rule would be imposed. The result was bureaucratic authoritarianism – a particularly ossified form of bureaucracy. You can look it up – it is  a real, distinct organizational form first identified by Guillermo O’Donnell. Eventually the Brazilian people developed a way of coping. Whenever a rule prevented people from doing what needed to be done, they would find a “jeito” – a way around. The phrase emerged, “Sempre tem jeito” – there is always a way, by which well-intentioned people can agree to work around bureaucratic impediments to what they need to do.  For every jeito there would develop a new rule and for every new rule a new jeito.

As our campus has grown, I have witnessed a proliferation of procedures, each of which has a purpose and a history and a justification, but which collectively create a kind of paralysis. It is a problem that has been recognized, and I have been part of quite a few conversations – and even a task force – aimed at streamlining our procedures and relationships. Many claim that the problem is inevitable given our growing size, but I am too much an optimist to accept that.

I cannot predict the future, but I would suggest that in 10 years, we will either have figured out a cultural change that removes this burden, or we will have become completely paralyzed by a growing set of interlocking rules. Meanwhile, I take every opportunity I can to suggest that my colleagues watch Brazil! Eventually, the Brazilian people triumphed and now live in a vibrant, rapidly improving country, the envy of the world in many respects. We can do the same.

Posted by James Hayes-Bohanan at 7:14 AM