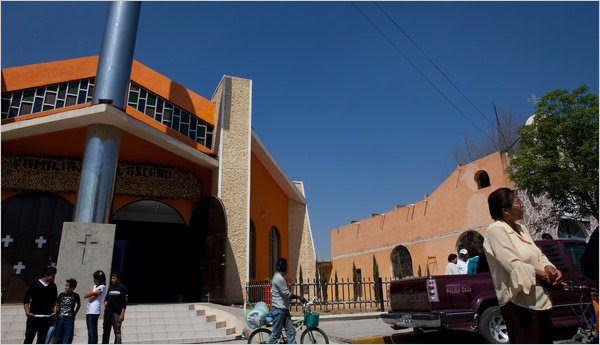 Last November, just after El Dia de Los Muertos, I posted an article about the violent unraveling of the US-Mexico border zone, a region in which I lived for seven years. The article focused on the growing violence that still remains largely confined to the Mexico side, though its roots are deep on both sides. I included a discussion of  Santa Sangre, a new, nihilistic religious movement created by and for the narcotraficantes themselves.

Damien Cave reports in today's NY Times that the movement has grown to about 6,000 independently-built chapels throughout the country. He also reports that the influence of traffickers is being felt in the mainstream church as well. His focus is on a new church building in Pachuca (north of Mexico City) that was funded by a well-known member of the Zeta gang. Although at least one blogger sees this as bias against the church, I find that journalist Cave offers a sympathetic description of the dilemma that church officials and parishioners face as they decide whether or not to accept such tainted money, and the difficulty of resistance. He also alludes to the moral taint that is often associated with more formally legitimate funding sources. The major implication of this piece, however, is that the U.S. drug war as it is currently pursued threatens to undermine the Mexican state.

Posted by James Hayes-Bohanan at 3:05 PM