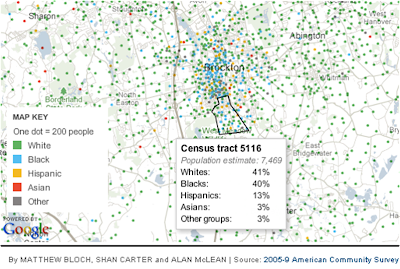 Thanks to the New York Times for putting data from the U.S. Census Bureau's most recent American Community Survey online in a very engaging format. Maps relating to race, income, education, and families are available at scales ranging from very local to the entire country. The data are aggregated at the level of the census tract, which are calibrated to include roughly equal numbers of people (so that tracts in Manhattan, for example, are tiny in comparison to rural tracts or tracts in most other cities). Individual dots are scattered randomly within those tracts or larger spatial units -- each dot representing different numbers of people depending on the scale being viewed. The maps are produced in partnership with Social Explorer, which provides access to a wealth of census data.
Posted by James Hayes-Bohanan at 1:14 PM