Climate in the Rearview Mirror

At the risk of adding to the already rich mix of metaphors in Professor Callan Bentley's excellent post on his Mountain Beltway blog, his work reminds me that the climate I grew up with is receding in the rearview mirror. It never pays to be too nostalgic, and that is certainly the case when it comes to climate. In so many ways, my daughter will never know the world I grew up in, and a lost climate is just part of that. Something about passing the 400 ppm mark for the final time, though, should give us all pause.

On his blog -- hosted by the American Geophysical Union -- he explains that although the global concentration of carbon dioxide passed the  400 ppm mark for the first time about 18 months ago, it passed it for the last time this past Sunday. 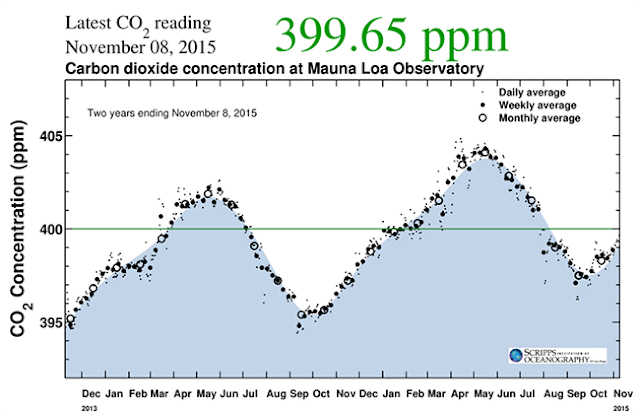 As Al Gore explained in An Inconvenient Truth, the observatory at Mauna Loa provides a long-term estimate of temporal changes in global carbon dioxide concentrations, because CO2 mixes very evenly in the troposphere. For reasons that professor Bentley explains (i.e., geography), the concentration varies oscillates quite steadily over a range of about 8-10 ppm each year. But it has been ratcheting up steadily for decades, going up 9-10 but coming down only 7-8. I would love to play a game of chance with anyone who believes these are "random fluctuations."

The number was 280 when carbon-based industrialization began, and was 350 when I was in college. The climate talks in Paris at the end of this month will be considered successful if they limit future increases. But we -- and our children and their children -- will almost certainly not see the number this "low" again.

I provide a bit more context for this graphic on my general climate change page, and although I think trying to convince people of the "reality" of climate change should not take too much of our time, I have done exactly that on my posts Climate Foxholes, the Business Case, and Frosty Denial.

Posted by James Hayes-Bohanan at 9:19 AM