Land of the Free and Home of the Cafe

I share this as a reminder -- in the wake of terrible attacks in Paris -- of what our country can be. If we want the bragging rights of a free and brave nation, we have to work at it. Terrorists half a world away know this, and they are challenging us either to live our values or to abandon them.

I am an optimist -- otherwise I could not be a teacher -- so I think we will get through this crisis and be the stronger for it. But not if we give in to our fears.

Herewith, then, are brief links to several voices making the case that as we work against the terrorists, we should not also work against their victims, which is exactly what many are calling for at the moment.

Former Secretary of State Madeleine Albright argues that ISIS Wants Us to Think Refugees are the Enemy. Even if we do not think of them as the enemy, treating them as the enemy will have the same exact effect, Giving ISIS Exactly What it Wants, according to Daniel Marans.

To resist this, we can examine why Fear Drives Out Compassion, and work to overcome this natural reaction. Both the fear and resistance to that fear can be bipartisan, as statements by Sen. John McCain and former Secretary of State Condoleezza Rice make clear.

Some more detailed analysis of the prospect of refusing refugees is provided by Max Fisher, who includes constitutional issues and the vetting process in this discussion. Elise Foley provides more information on the screening process.

It is at this point that many will point to the inevitable costs and risks. And of course there are both. But the costs and risks we are being asked to bear are a tiny fraction of those already being borne in Europe and by several of Syria's neighbors, such as Turkey. And, believe it or not, Syria itself actually HOSTS more refugees from other countries than the number of Syrians who would be hosted in the U.S. under President Obama's plans.

(Those who urge Syria's neighbors to do even more can consider doing more for the refugees in our own corner of the world, including women from Central America, or other refugees world-wide.)

Of course, the refugee discussion is part of a broader debate this year about migration in general, whose long history Spencer Dukoff examined back in August. As he pointed out, we love to brag about our melting pot, but we've tended to dislike each new ingredient.

I will digress into the world of mathematics with brief mentions of non-Muslim terror threats and the non-terror threat of climate change, before returning to coffee to wrap up this post.

Yes, coffee. More specifically, coffee shops. After a hiatus for caution and for mourning, Parisians are taking to their cafes again, determined not to live in fear.

Minutes after I posted this, French President Hollande -- in the midst of discussing decisive action by French police -- exhorted his country not to engage in reprisals against Muslim neighbors, whom he reminded them are also victims of terrorism. He also renewed his commitment to welcome 30,000 refugees.

Steve Sack of the Star-Tribune captures this moment, in which many are choosing exactly the path ISIS desires. 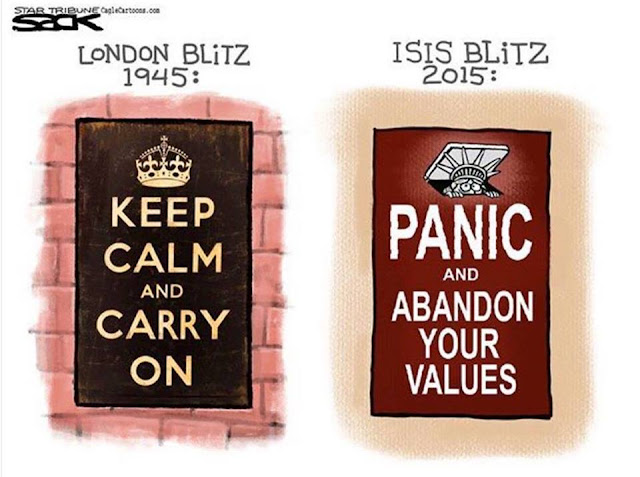 Posted by James Hayes-Bohanan at 9:40 AM