Every year since 1995, the United Nations has convened a Conference of the Parties (COP) to address climate change, most notably in 1998 when the Kyoto Protocol was agreed, though never ratified by major parties such as the United States.

Better known as climate-change conferences, these meetings are where action at the level of the nation-state is negotiated. Most years, expectations are low, and they are certainly not exceeded. Every few years, reason for higher expectation will be found, as in the runup to the 2009 meeting in Copenhagen (which I dubbed Hopenhagen, only to be disappointed almost before it started).

At this writing, hopes are attaching to the upcoming meeting in Paris, whose main goal is a "guardrail" commitment to limiting further warming to no more than 2 degrees Celsius (that's 3.6 degrees Fahrenheit), which has been a moving target for some years now -- not more than two more, please!

The term "guardrail" refers to the emphasis on limiting overall change, which of course is important. Equally important, however, is the need to address the differential vulnerabilities of people to climate change. However much further warming takes place, some people will be more vulnerable than others, and an exclusive focus on global targets necessarily means outcomes that are uneven, perhaps even fatally so. The uneven geography of vulnerability is is one of the central concerns of climate justice, and something to watch as the Paris conference unfolds.

The geography of responsibility is another important concern, however, and the pre-conference negotiations are all about countries pushing each other to make commitments to the "guardrail" target in proportion to their responsibility for greenhouse emissions.

In a recent essay on NPR, Nell Greenfieldboyce compares the problem to that of friends trying split a bar tab. It is a useful analogy, but she errs slightly in putting the emphasis on what various parties can afford to pay, rather than what they should pay. Instead of asking a wealthier friend to kick in a few extra bucks, as she suggests in the essay, those who have enjoyed a few extra cocktails while their friends sipped on soft drinks should be the ones to step up when the bill comes.

Unfortunately, in each of the previous conferences, the major parties have simply chosen to order another round in order to put off paying the tab.

When discussing the conference -- and the "bar tab" metaphor -- in my Climate Justice class this week, a student asked the very appropriate question of what the relative contributions actually are. The cartogram below is a good way to visualize the variation in contribution. Emissions are proportional to three factors -- population, consumption, and technology. 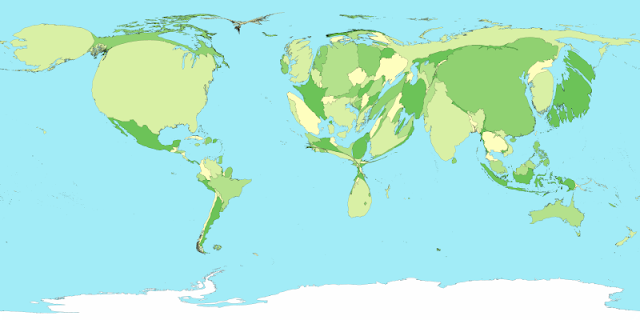 This infographic was made published in 2009, so although the general impression it creates is correct, it is not quite precise in detail. Since this was created, the rapidly growing economy of China has moved that country into the dubious position of first place in greenhouse pollution. Although per-capita pollution from the United States remains much higher, its population is four times as great, so its overall impact is greater. It is part of an interesting collection of cartograms of the social and economic world.

To make current comparisons, look at the greenhouse country list on Wikipedia. Note that it combines emissions of all the major heat-trapping gases.

Posted by James Hayes-Bohanan at 11:43 PM