This time of year I enjoy learning and teaching about the Day of Dead, a Mexican tradition that immediately follows Halloween. Both are coincident with the English All Saints (or Souls) Day or Celtic Samhain, one of eight days of solar importance in the course of a year. The Farmer's Almanac explains the importance of these quarter and cross-quarter days, while the EarthSky site provides more astronomical detail.

I was feeling pretty good about the degree of inclusion with which I approach this autumnal holiday/holy day, when the following came over the digital transom by way of one of my dearest Brazilian friends:
Knowing I'm one of his favorite gringos, I did not take it personally. Rather, I wondered how I had failed to know anything about this folkloric figure after spending time in so many different parts of Brazil over the past two decades.

This drove me straight to Google, I must admit, and I found that although Saci has deep roots in Brazil itself and its European and African antecedents, the observance of Saci Day on October 31 did not begin until 2005, when it was introduced specifically to counter the growing importance of Halloween (Dia de Bruxa -- Day of the Witch) in Brazil.

Saci is an impish character, one of many figures in Brazilian folklore that conveniently allows for small mistakes or misdeeds to be explained away. He is seen as deft and agile, despite the holes in his hands and his having only one leg. His origins are indigenous, though his appearance varies according to differing associations with Africa or Europe. He is often seen as the embodiment of dustdevil storms. 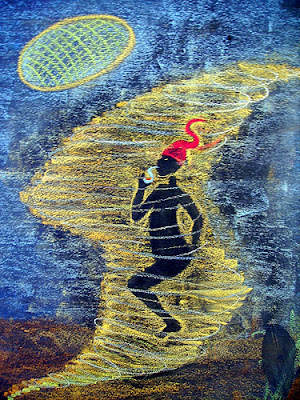 One version of the Saci Pererê legend is told in this English-language slide show:


It is also described in a short Portuguese video, A Verdadeira História de Saci Pererê (The True Story of Saci Pererê). In addition to his own new mini-holiday, Saci has been frequently represented in song, including the samba song Fumo de Rolo.

Now that I know something of Saci, I'm already looking forward to an even more inclusive Samhain in the future.

As soon as I shared this blog post, the Brazilian friend from whom I had posted the Saci notice above passed along this video from a popular children's variety show, in which children dance on one foot to celebrate Saci.