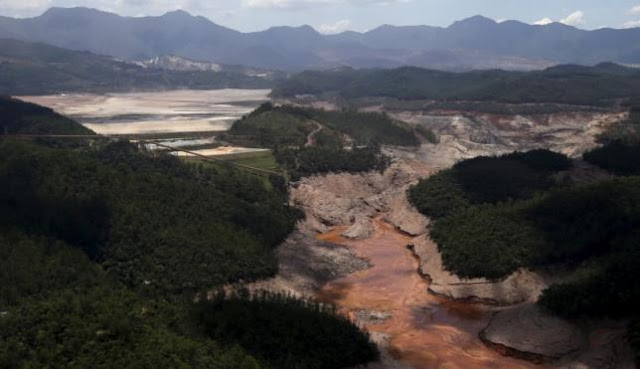 Ironically, Rio Doce means "Sweet River," but this river in Southeastern Brazil is the site of an environmental disaster that is bitter indeed. The disaster occurred at Mariana in the state of Minas Gerais, a state whose very name means "General Mines" and which has been the location of just above kind of metal mining one can think of. The breeches on November 5th destroyed the small community of Bento Rodrigues, and toxic muds continue to flow toward the Atlantic Ocean.

The scale of the damage caused by the collapse of two mining dams is difficult to exaggerate.


More of the story is told by Greenpeace and by Reuters.

I learned of this story from a Brazilian student who is from Espirito Santo, a small state that is downstream from the disaster, and toward which the toxic waters and sediments are moving. From her I also learned that many in Brazil are comparing this to the Fukushima disaster in Japan, in which lack of disaster preparedness led to a massive release of toxic material, affecting thousands of people. So far, neither the mine owners nor government officials have been willing to respond adequately to the scope of the disaster.

This dramatic images and haunting music of this video capture the anguish and frustration many in Brazil are experiencing two weeks after the breeches, as they demand a more thorough response from both industry and government.

In some ways, the Rio Doce collapse is similar to the 1889 Johnstown Flood near Pittsburgh, in which a privately-owned dam was neglected and collapsed (see also NPR interview). In that case, no long-term effect from toxic waste was involved, but the immediate death toll was much higher, as a wall of water killed 2,200 people in very short order.

Like the Deepwater Horizon and Fukushima itself, both crimes remind us that although climate change is our single biggest environmental hazard, it is far from the only one.

According to ABC News and other sources, the toxic tailings have now reached the Atlantic coast, after polluting approximately 200 miles of river along the way.
Additional resources

This is both a rapidly developing story and a situation that has many facets and that will be with the people of Minas Gerais, Espirito Santo, and possibly other coastal locations for decades. Below are a few resources for those interested in learning more and in helping in some way.

RioDoce.Help is a clearinghouse for real-time information about assistance. It is a bit tricky to navigate at first, but it does include both English- and Portuguese-language tools for connecting donors to specific people in need.

Greenpeace provides information about the disaster on its main site and information on how to help (como ajudar) on its Brazil site.

The Globo news site also provides news about aid in Portuguese, along with maps of the affected area.

Posted by James Hayes-Bohanan at 11:22 PM