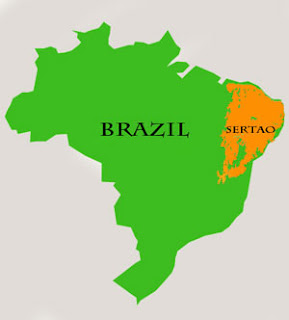 From the University of Cincinnati film archives comes a 1964 film that provides as much insight into Cold War thinking about Latin America as it does its ostensible subject, the prolonged drought in the sertão -- the "Barren Lives" region of Brazil.

The sertão is also the region of forró music, The widely-known Asa Branca and the more modern (if obscure) Chover are among many forró songs specifically about drought. See my Musica: Brazil page for these examples.

The film is entitled Brazil the Troubled Land, and was produced by McGraw-Hill, apparently for classroom use. I will actually be using it in my own classes, both because of the lessons it intends to convey and because of the unintended lessons about U.S. attitudes toward Brazilian peasants in particular and economic disparity in Latin America in general.

The intended lessons are about the bleak landscape of the Brazilian Northeast and the difficulties of life in perpetual drought. Visually, the 25-minute piece made for U.S. classrooms strongly resembles the 100-minute epic by Nelson Pereira dos Santos, which I studied as a film adaptation of Vidas Sêcas and as an exemplar of Brazilian Cinema Novo (New Cinema). That film can be found on Amazon and on YouTube, and preceded the classroom piece by just one year. Both films show the Northeast as a place of hard work, dry lands, and bleak prospects for those who make their living most directly from the land.

Of course, the drought is both a physical and a social phenomenon. Everyone experriences the same climate, but not everyone experiences it the same way. The Troubled Land film hints at land tenure as the real problem in the sertao, but couches this mainly about the threat that creates for the United States. The minifundio/latifundio (small farm/big farm) problem is illustrated in rather grotesque fashion, as a peasant family explains that they need more land on which to work and a fazendero jokes about killing those who try to organize.

The narrator also explains that life expectancy for peasants is in the 30s, implying that it has to do with the climate itself, rather than social inequality. From the work of La Isla Foundation among sugarcane workers in Nicaragua and elsewhere, it is evident that long hours in the hot sun with minimal hydration may make sugar harvesting one of the most dangerous occupations in the world.

But all of this is couched in terms of the threat that peasant organization might pose for the United States. Both films emerged shortly after the Cuban Revolution, and in the United States the greatest concern was not for the livelihood of workers but for the possible "domino effect" of the revolution.

The film was produced in the same year as the coup that began two decades of military dictatorship in Brazil. This was a dictatorship that had the support of the United States government, as did many in Latin America and beyond.


BRAZIL THE TROUBLED LAND (1964) from HMH Archive on Vimeo.


Posted by James Hayes-Bohanan at 4:43 PM