Back to Nicaragua -- Day 3 Matagalpa

We began our third day (January 6) of the 2012 Geography of Coffee study tour with a quick stop at a mural that we had noticed earlier in our travels around Leόn. Murals are an important part of social and political discourse in Nicaragua, as they are in Mexico and elsewhere. As many murals as I have seen, I had never had the opportunity to speak with a muralist. This new mural commemorates the July 23, 1959 massacre of four University of Leόn students by Samoza’s National Guard. The lead artist told us that he has been shocked to learn -- from conversations with visitors to his mural -- about parallel events in many other countries, and from us he learned of the Kent State killings on May 4, 1970 (my 7th birthday). 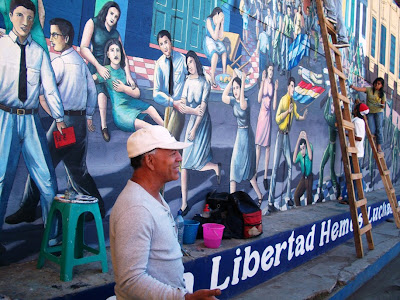 As we left Leόn, we stopped at the small “hervidores” (boilers) in the community of San Jacinto. These small hotpots and geysers are a reminder of the great variety of volcanic and geothermal features here on the zone of tectonic convergence between the Cocos and North American plates. 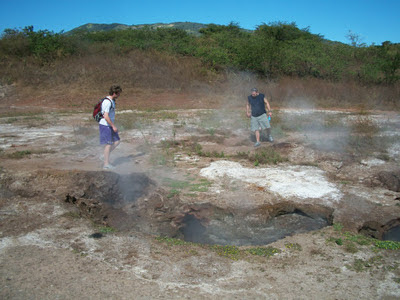 Our travels then took us through Sebaco to the city of Matagalpa, capital of the state of the same name, and in many ways the capital of Nicaraguan coffee. I enjoy this city immensely – a vibrant downtown that is just the right size for exploring on foot, surrounded by beautiful mountains. Among the many changes I have witnessed in six years of visiting this city is the new statue to Carlos Fonseca, the intellectual leader of the Sandinista Revolution, and one of its martyrs. It is delightful to see a major public monument of hero holding a book. 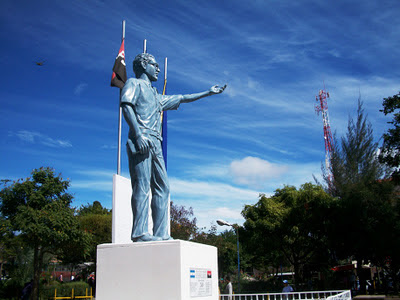 Another change over the past half-decade has been the steady improvement of Matagalpa’s Coffee Museum. Some equipment is on display, as are many storyboards that tell the story of coffee in general and Matagalpa coffee in particular. The graphic below is not completely accurate, but provided a great framework for our guide Freddy and I to lead a discussion of how coffee spread from its origins in Ethiopia in AD 500 to the rest of the world, mostly through the process of colonization. 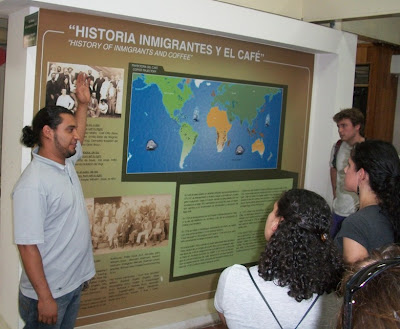 Each of my visits to Nicaragua has included a visit to the grave of Benjamin Linder, the young engineer who was the first U.S. citizen to be killed in the Contra War. With many people of my generation (or slightly older), Ben had come to Nicaragua to support its people during the very difficult period following the Sandinista Revolution. He was assassinated while working to provide hydroelectric power to coffee-growing communities of the far north; we will be visiting those projects in a few days. 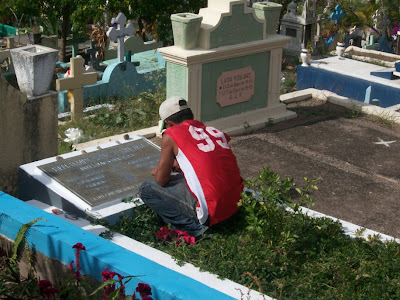 Ben Linder’s funeral was one of the largest ever held in Nicaragua, and he was buried with honor in Matagalpa, its citizens insisting that he belonged in the local section of the cemetery. In previous visits, we have been impressed and curious about the ornate appearance of the graves and the activities of local people attending funerals or tending to the graves of relatives. Beginning in 2011, I decided it would be better to participate in some small way than simply to observe and take photos. For this reason I have brought students to the grave of Ben Linder to honor him. Following the tradition usually reserved for El Dia de Los Muertos (Day of the Dead), we remove trash and weeds from the area around the grave, bring flowers, and toast the departed with a beverage he or she was known to enjoy in life. On our arrival, we were pleasantly surprised to learn that a ground cover and an orange tree had been added since my last visit, and that a local artisan had been hired by a Matagalpa family to repaint the lettering on the gravestone. 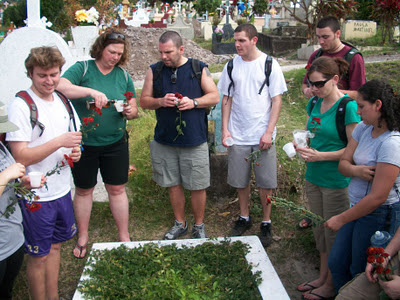 We concluded the day with a visit to CECOCAFEN, a cooperative of cooperatives representing more than 2,600 coffee-farming families in Matagalpa, Jinotega, and Nueva Segovia. It was a tourism project of CECOCAFEN that originally brought me to Nicaragua, and visits to its member farms remain central to the study tour. During a visit to the CECOCAFEN main office, Santiago Dolma spent a couple of hours with our group, with the help of translator Rafael. He began by taking questions from students, which allowed him to bring together a lot of interesting ideas, both practical and theoretical. Given recent news about the “divorce” between the major certification agencies (TransFair and FLO), it was a privilege to have an in-depth discussion with this expert. 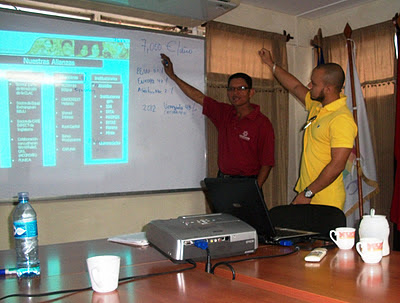 Posted by James Hayes-Bohanan at 8:33 PM