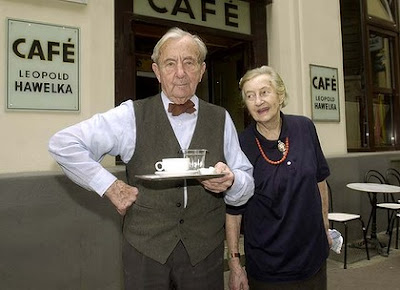 In a single section of last Friday's Boston Globe, I found two extraordinary stories about the geography of coffee shops that I will use to introduce my next batch of coffee students to the range of possibilities. The first was a lengthy obituary (culled from the Washington Post) of Leopold Hawelka, who recently died at age 100. His first attempt at opening a cafe was interrupted by World War II, but he did not wait for the partition of his city to be lifted before embarking again. In a city with centuries of café history, his story stands out. From starving artists to the simply starving, Café Hawelka was exactly what a café  is meant to be: a place of warmth and gathering. (I include the Sydney Morning Herald tribute and a Wikipedia article, in case the link to the Post item expires; the story of this fascinating place should be read and shared!)

As I turned the page from the sublime pinnacle of café culture, I found this title above a much shorter article, dateline Augusta, Maine: "Suspect denies setting fire to coffee shop." For many readers of the Metro section, this might be the first encounter of the cringe-worthy phrase "topless coffee shop," but cafe geography is sometimes sexy or even prurient. In the story, we learn that a Kennebec County Superior Court judge endured defendant Raymond Bellavance's four-hour-long denial of charges that he burned the aptly named Grand View Coffee Shop, where a former girlfriend worked. According to a subsequent report on WABI-TV, the shop was occupied at the time of the fire, with two children among the seven people present. Bellavance was found guilty and could be sentenced to as much as thirty years.

As I marveled at the extreme variety of cafés and café stories, a friend referred me to the story of Café Riche, two blocks from the now-famous Tahrir Square, where the Arab Spring first came to Egypt. I was reminded of my recent post about Café Slavia in Prague, but the century-plus experience of this Cairo corner shop is if anything even more amazing. As described in The Economist, Café Riche has been a hub of intellectual foment since it opened in 1908 -- both a microcosm of and a critical element in the urban geography of Cairo and the political geography of the entire nation. As the world watches to see what will happen in post-Mubarak Egypt, we would do well to watch this single street corner.

Posted by James Hayes-Bohanan at 11:07 PM