Back to Nicaragua -- Day 4 Matagalpa

We awoke this morning (Saturday) at the hostel La Buena Honda in Matagalpa, the best city I know of for an early-morning walk. As I always do when staying with students in Matagalpa, I announced my intention to take a walk early in the morning, and I was pleased that five students were ready to set out with me at 6:30. A few blocks from the hostel, we climbed a steep street to an even steeper street to an even steeper trail that has been upgraded to a staircase since my earliest visits to the town. I chose this part of town for the great views of the cathedral and the rest of the city center; I chose the particular staircase because I know a scarlet macaw lives in a cage on a patio at the very top – a pet with a better view than most humans!
As we turned toward the stairs, I noticed some people descending toward us, but not just any people: a full mariachi band in bright red, skin-tight suits. Apparently on their way to a gig, they seemed as surprised to see us as we were them, and when I tried discretely to snap a photo of this surreal encounter, their leader said in Spanish, “A picture for the movie! A picture for the movie!” and struck a pose. 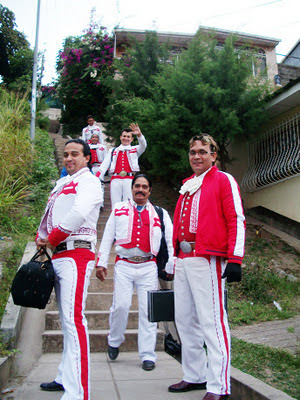 We did not have time to discern whether they were delusional or merely very adept kidders. A moment later each group had continued on its way, and we were so taken aback that I forgot to point out the macaw, though I did get a glimpse to confirm it is still there. 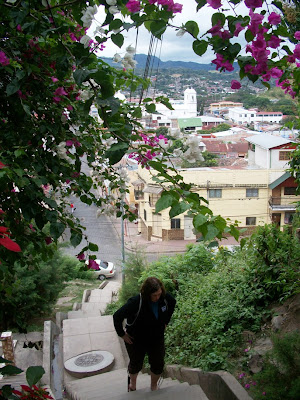 We did, however, collect our thoughts in time to turn back toward the downtown area, and our climb was rewarded with a delightful view of a city just waking up to its weekend. Our attention then turned to the hilltop neighborhood itself, where a high degree of spatial heterogeneity creates great visual interest. As with peripheral areas in many Latin American cities, this steep hillside includes a kind of intense variety that results from relatively rapid change. Nice houses, even quite fancy ones, exist next to those that range from modest to deplorable.
This fine-grain variability results in part from the timing of the arrival of each household, relative to prevailing prices at the time. Even more important, however, is the process of in situ accretion, by which simple homes may be established with very basic materials and then improved and expanded over time, as financial circumstances allow. This house provides a very simple example of such an expansion, while illustrating several other points about local geography. 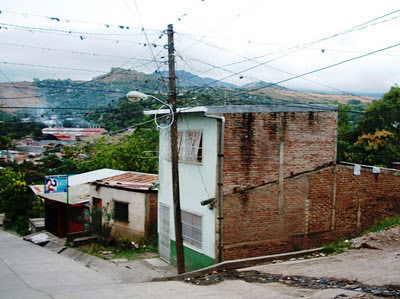 The second story of this house was added as some point well after the house was constructed, a change that is evidenced by very subtle markings on the front of the house but that is very clearly visible on the side. The electrical utility service appears to be closer to standard than is sometimes found in such settings, even elsewhere in Matagalpa, but it does appear that some other-than-formal wiring has taken place. The wires, incidentally, hosts epiphytes – plants that typically grown on other plants. The forests of Matagalpa are rich with such plants, and this biodiversity is evident even on non-organic surfaces in the city itself.


The newly constructed improvements in this hillside community clearly help to improve walking, biking, or driving conditions. The wide ditches along the street indicate, however, that provision of proper drainage – which is much more difficult to achieve than electrical service – may have been an even greater priority. The drainage and access arrangements in the “back yard” of a nearby house illustrate just how precarious the situation can be. Systematic drainage improvements are complicated if they are undertaken after the settlement process has taken hold. Significant public investment may be supported, however, in cases where the improved drainage not only protects the livelihoods of those in such communities. It also may protect down-slope communities from added flood risk. 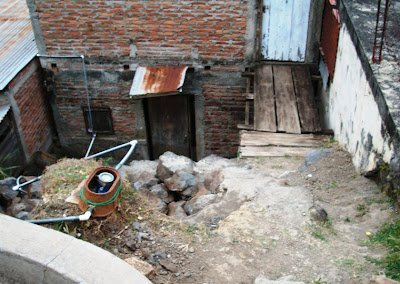 From the city, we headed upward to El Chile, a community of Matagalpa indigenous who grow some coffee but are better known for weaving. In the middle of the twentieth century, the dictator Samoza was determined to make his own cotton fields near Leόn the monopoly producers. He destroyed the cotton fields cultivated by the Matagalpa indigenous, both to eliminate their competition and to compel them to work for him. The tradition of weaving was nearly lost until an Argentine named Marta came to the area as a volunteer during the Sandinista period. From a few older women in the community, she learned the traditional weaving methods, and adapted them to a looms that she had built on the basis of a Spanish model. 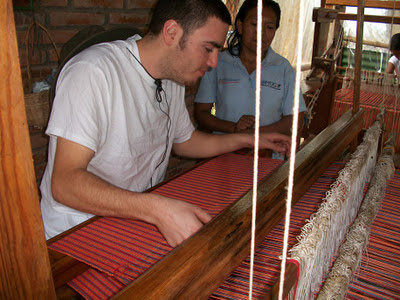 We met Marta during our 2010 tour, when she was contemplating retirement and was concerned about the future of the project. We learned that she had actually visited the project the day before our own visit this year, and she must have been very pleased. The weaving continues, though in three separate groups. In Marta’s former home, Francisca now leads the weaving effort, while other members have been very successful in marketing –promoting the products, finding new sales outlets, and better understanding prevailing prices so that the women actually earn a bit more than they once were. 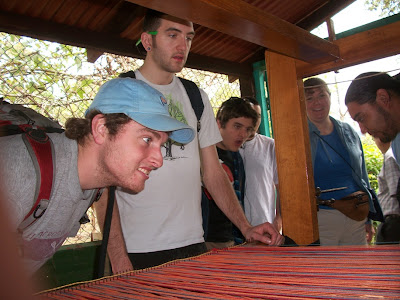 We went to the second of the three small weaving co-ops now operating in El Chile, and learned how the traditional process works. Where a mechanical loom can produce about three meters of meter-wide cloth in a day, the belt loom is limited to a narrower piece of cloth, produced at about one meter per day. I purchased a few small purses made in this way, and will be offering them for sale at BSU’s Just Trade Fair on April 5 of this year. 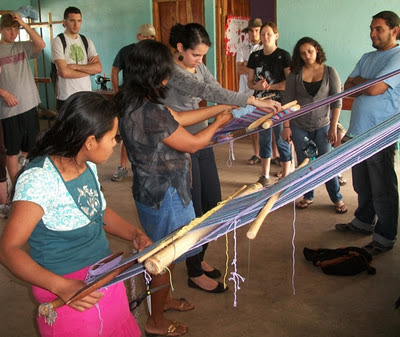 After visiting the two weaving cooperatives, we climbed through a nearby coffee farm to the top of a local peak, from which we enjoyed a 360-view of many surrounding valleys and mountains. Of course, such vistas always call for a group photo! 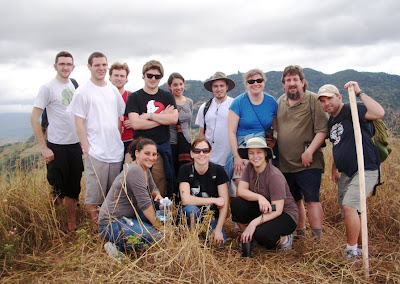 Looking at the view in more detail (see below), geography students were able to discern some coffee fields by color and texture. That is, the coffee fields (a narrow band just above the student’s hat) have darker leaves and a lower, more uniform height than surrounding forest. Although only minimal acreage was visible in this way, we understood that much of what we see in this view is actually secondary forest that shelters shade-grown coffee, including some of the very best high-grown coffee in the world. From El Chile, we returned to Selva Negra, a famous and historic coffee estate which was our home base for this portion of the journey. There we watched the delivery of one of many truckloads of freshly-picked coffee “grapes” that were being brought in at the end of a harvest day. After every third truck, the intake bin would be flooded, and the water used to carry the coffee through the first part of the processing, in which skins are separated from seeds (beans), and the coffee is allowed to ferment in water for 18 hours (the duration varies somewhat). 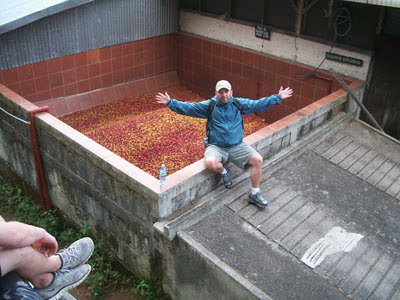 We did not get to see the process this time, as we had an appointment with Eddy Kuhl, the engineer, historian, artist, and raconteur who has operated Selva Negra with his wife Mausi Kuhl since 1974. 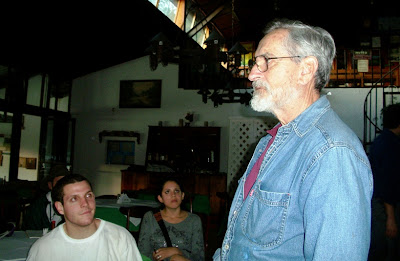 We spent the early evening being entertained and educated by Eddy, who literally wrote the book on the history of coffee in Nicaragua. He told the story of coffee’s introduction from the point of view of his own family and that of Mausi. As with many young German migrants toward the end of the nineteenth century, these ancestors were attracted by offers of free land from the Nicaraguan government. Such incentives had begun in the 1850s, as Nicaragua witnessed many potential settlers passing through the southern waterways of the country on their way to the California Gold Rush.
Posted by James Hayes-Bohanan at 12:45 AM