Back to Nicaragua -- Day 8 La Corona

Note: This post is one in a series of daily posts about my January 2012 return to Nicaragua -- the sixth time I have offered my Geography of Coffee study tour, which becomes more interesting and enjoyable each year.

Everyone who participates in the Geography of Coffee study tour agrees that the home stays with families are the most important part of the journey. In fact, for the first program in 2006, it was only this part that I was certain of; the rest of the itinerary has been developed as a matter of trial-and-error as I have learned of other opportunities. And for five of the six years, those home stays have been in La Corona. In 2011 we were in La Pita -- another wonderful community in the San Ramon township -- but I was glad to be back with my friends in La Corona.

A few local dogs were attentive during a brief orientation meeting; one sits here at the feet of a student with notable footwear. 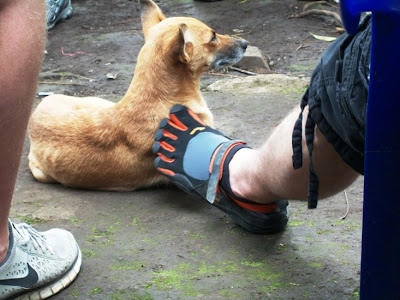 After some introductions at the home of the Rayo family, our true orientation to the community of La Corona began. We started with a visit -- led by my friend Alfredo -- to the large farm from which the community emerged in the process of land reform following the 1979 revolution. In the foreground are the wet-mill facilities of that farm, which was operating at least at partial capacity until recently. In the distance are the shade-grown coffee farms of the community. The coffee itself is not visible, as these are covered by two canopies. One is of bananas and other fruits, which add flavor, and nutrients through the soil while augmenting family food supplies and income. The higher canopy provides shade -- modifiable through pruning -- to regulate the development of the coffee cherry while supplying bird habitat and firewood. 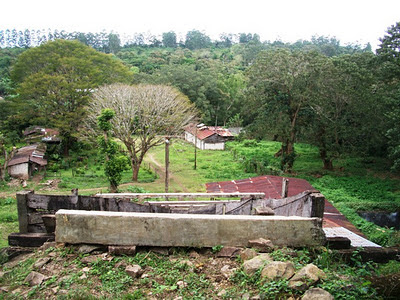 Diversification is the key to reducing the downside risks of dependency of commodities. For coffee producers, education is key to that diversification. The population of La Corona has doubled to 2,000 people since it opened a high school – the first in Nicaragua in a rural community. My favorite librarian poses in front of La Corona’s community center, which includes a library (biblioteca), as well as a very successful program in art education. 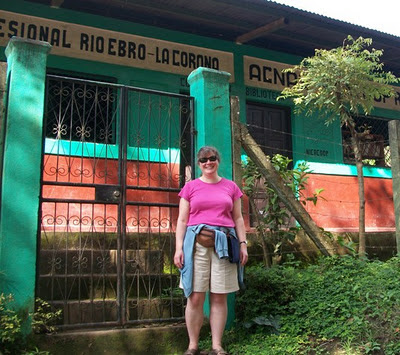 After a delicious community lunch and the short tour, our group divided into small groups for the home stays. Because La Corona is a series of homesteads with no central village, our group members were farther apart from each other than we had been for a week of close-quarters learning. Whenever I visit La Corona, I stay at the home of Doña Elsa and Don Alfredo, whose son Alfredo is a teacher and a leader in local and global youth movements. These visits are an ideal way to learn what participation in coffee really is like for small producers. During this visit, for example, my host Don Alfredo explained aspects of both planting and pruning that I had not learned before. 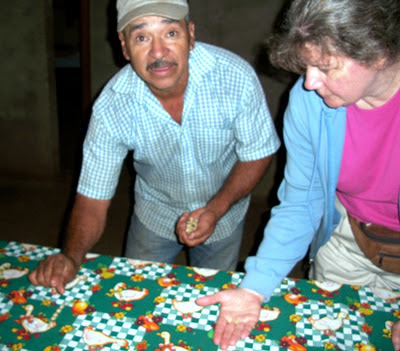