Back to Nicaragua -- Day 5 Selva Negra 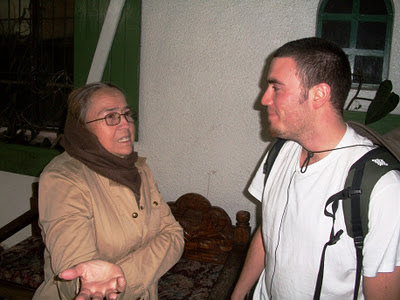 Just as we had ended our fourth day with Eddy Kuhl, we began our fifth with his wife Mausi, whose expertise is in the agronomy and ecology of the Selva Negra 1500-acre estate and reserve. For almost two hours, she drove us throughout the property, describing the many symbiotic relationships among the operations of the hotel, the farm, and the land on which each depends. At the end of the tour, our student Nick said, “My mother [an organic farmer in Massachusetts] would love her!” It was then that I remembered that Mausi had actually had dinner at Nick’s house and visited his family farm – ColchesterNeighborhood Farm, of which my family is a CSA member – during a visit to Bridgewater in 2010.

The social and environmental practices at Selva Negra are a positive model for other mid-sized producers, more than earning the farm’s organic and Rainforest Alliance certifications. In fact, in the current – and controversial – efforts to expand fair-trade certification to farms other than small cooperatives, Selva Negra is among the first mid-sized farms in the world to be considered. 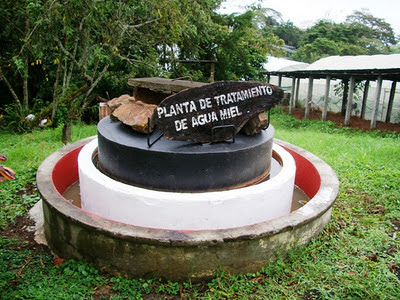 Because water pollution is one of the major environmental concerns related to coffee, the Selva Negra has devoted much of its attention to the reduction of eutrophication. Even on farms where no pesticides or fertilizers are being used, the high concentration of sugar in coffee pulp can result in severe nutrient overloading in surrounding surface water. At Selva Negra – as at some other relatively large, progressive farms – the “honey” water from the fermentation process is captured in underground tanks where it can be used to create not only liquid fertilizer, but also methane gas for cooking. Selva Negra goes a step further, having implemented biogas capture in many other waste streams. 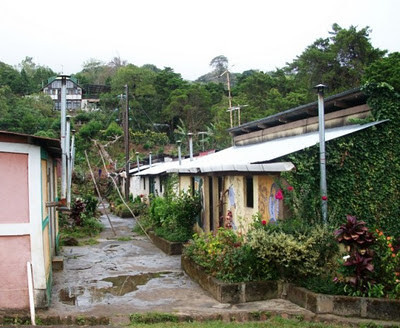 The sale of coffee gathered from 1.5 million trees facilitates a level of social security at Selva Negra that is rare among coffee growers. Housing is provided for the 250 year-round employees, which include some working in their third generation. A recent project provided high-efficiency cooking stoves for fifty households on the property. These stoves have reduced demand for wood, reduced cooking times, and – most importantly – reduced the health risks associated with conventional stoves. 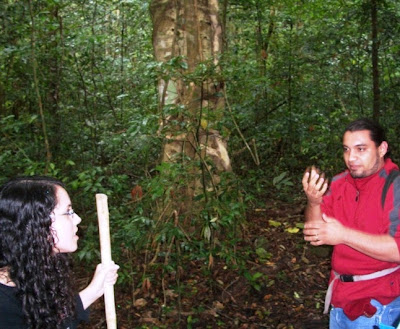 From the tour of La Hammonia Farm (named for Hamburg, Germany), our attention turned to a strenuous hike into the Ardenal Reserve. Our three-hour hike on steep, often muddy trails was rewarded with a much richer understanding of the ecology and beauty of the cloud forest sub-biome. The experience was all the more informative because of our guide Freddy’s understanding of the natural history of many of the forest’s hundreds of plants and animals. He is shown above explaining how a strangler fig tree – an emi-epiphyte – takes over and eventually kills a host tree, without actually drawing any nutrients from it. 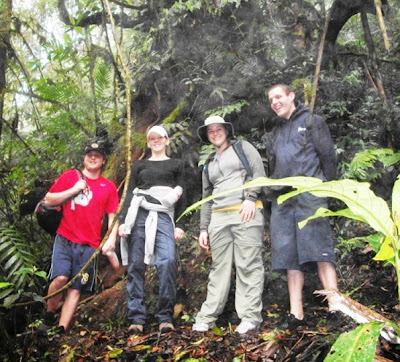 Abundant heat, sunlight, and moisture allow some trees to grow to enormous size, creating structures on which many other plants can grow, and providing fun opportunities for group photos. The Ardenal Reserve is known for the several hundred species of birds it shelters, but the only bird who posed for my camera were a pet parrot (parakeet) who was entertaining the chickens and Guinea fowl at a farm located at the far edge of the reserve. 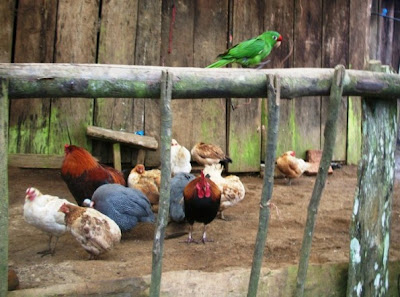 At the end of the hike, we enjoyed a quick lunch at a roadside shop that specializes in bean soup, where we met a pet macaw. 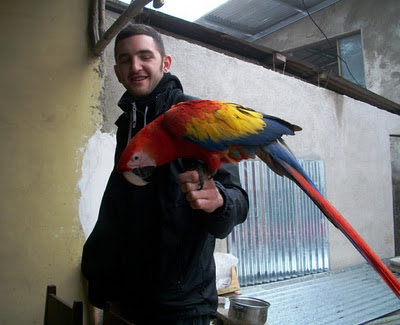 From there, we were on our way to one of the tour’s major highlights. We gathered at Los Piños, the farm of the inimitable Byron Corales and his family. The fourth generation of this family is now caring for the plants, animals, and soil of this farm, with amazing results for coffee quality. With a rare combination of clarity, passion, and science, this “Poet of Coffee” weaves a mesmerizing tale of the care required to produce the world’s best coffee. 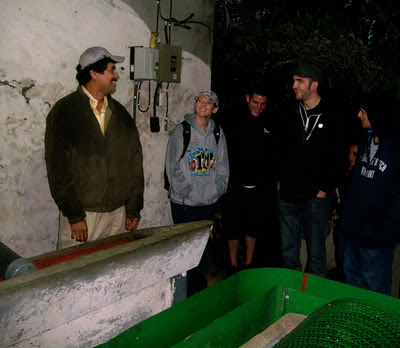 As Byron explains, the error of the misnamed Green Revolution is that it focuses on a single attribute of soil and agronomy: the relationship between macronutrients and short-term productivity. The Green Revolution emphasized nitrogen, phosphorous, and potassium as the soil constituents best correlated with yields … and perhaps not coincidentally the easiest to sell.
Byron maintains these nutrients by carefully managing compost and manure, and in turn cares for the manure by carefully balancing the organic diet of his cattle. Equally important, however, he managed the microorganisms and enzymes in the soil, and interplants coffee with other fruits that influence the flavor. By allowing the roots of their carefully chosen coffee varietals to share the soil with other, carefully-selected plants, the Corales family creates a coffee that is almost unbelievably delicious. Because it was recognized as a world-wide Cup of Excellence Winner in 2004, an auction determined a price from which Byron has been able to calculate the retail value of the manure from his beloved cattle. (For more on the coffee itself, see the Salt Spring video I posted after our farm visit.)
As if the feeding of our minds and souls were not enough, Byron, his daughter Sara, and the rest of the Corales family fed us delicious fruits and chicken empanadas, in addition to all the world-class coffee we could want. 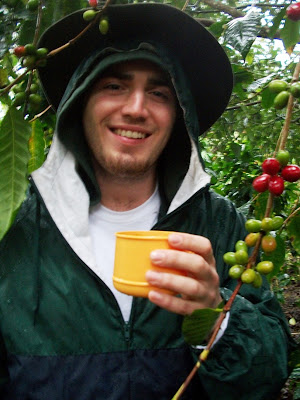 Posted by James Hayes-Bohanan at 7:43 AM