It is fitting though sad that pizza magnate Herman Cain's presidential ambitions should be crashing on the shoals of his geographic ignorance during Geography Awareness Week. All that he could say for sure about Libya was that Obama's policy there was wrong, because he is Obama. The pause as he tried to remember anything -- anything at all -- about a country that has been in the news constantly for the past few months was excruciating. War is how Americans learn geography, if at all, but even war will not always do the trick, apparently.
The lapse was embarrassing, even for the journalist asking the question, though it was a boon to comedian Jon Stewart. Political blogger Ana Marie Cox finds his demeanor about the incident even more troubling that the geographic ignorance itself.

For me, though, the greatest significance of the incident is that the ignorance we may mock in a politician is all too common in our own schools and workplaces. When I visit Nicaragua -- the second-poorest country in this hemisphere -- I notice that almost any kind of office or place of business has a couple of maps on the wall, as do most homes. In a contest over geographic knowledge, a high school graduate in almost any country of the world can run circles around most U.S. college graduates. Not just place-name geography, either, but where things are, why they are there, and how it matters. These things are much better taught in countries where progressive education did not mean getting rid of the geography teachers, as it has in too many parts of the United States. 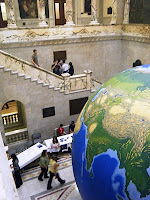 In Massachusetts today, it is actually illegal to become a certified geography teacher at the secondary level. Fortunately, my colleagues and I have found allies in the State House who are interesting in changing this. If Senate Bill 182 -- which would simply restore geography to its previous position in the curriculum and teacher preparation -- becomes law, perhaps we could open a seventh-grade classroom for presidential hopefuls. Incidentally, the bill has both Democratic and Republican sponsorship; such a classroom would be open to candidates from any and all parties!
Posted by James Hayes-Bohanan at 8:24 AM