February 2019 update: At some point since my 2011 post, the Green Bean came under new management. I now enjoy frequent visits there, mostly after my morning rows in New Bedford harbor. The staff are friendly and effective. I'm tempted to remove this post, but it remains a good reminder that location alone is not enough.  People are still the key variable in any business.

We were headed to New Bedford to visit Travessia Urban Winery, the last stop on our Coastal Wine Trail we had pursued as an intermittent staycation over the past six months or so. Travessia is the only one of the nine wineries on the trail (from Southwest Rhode Island to the tip of Cape Cod) that does not grow its own grapes, but this three-year-young winery uses grapes from some of the others, and is already producing better wines than others. (More on the geography of this transect of wineries in another post.)

About a decade ago, I helped to organize a region academic conference in New Bedford, and became quite interested in the renewal that was just starting to take place there. Local investment in the Zeiterion Theater (to which we have returned many times for a variety of terrific performances) combined with federal investment in the National Historic Park (naturally, a BSU geography alumnus was involved in that) and a lot of other leaps of faith to create a vibrant downtown, in the midst of a city that is on its way back. In an earlier post, in fact, I shared the nationally-acclaimed work that another BSU graduate has done with the National Park Service and local youth to exhibit and cultivate a sense of pride among youth in the city.

Back to the coffee shop. When we planned our outing to Travessia, we decided to visit the Ocean Explorium to see its Science on a Sphere. While there, we planned to visit one of the area's new coffee shops. The first choice had been Celtic Coffee, because I had heard good things about it from several students, but when we found several others independent shops even closer to our destination, we decided to save Celtic Coffee for another time.

Instead, we decided to try Green Bean, because of the cool sign and the promise of ethical and sustainable product. We had noticed the cafe from the south, corner entrance, but we actually entered from the north side of the shop, through a side door facing a small lobby shared with the winery. This turned out to be a very important distinction. We entered the shop and were pleased -- as have been some other reviewers -- with the light, spacious ambiance. With a varied menu -- even including several single-origin coffees -- plenty of seating and an inviting atmosphere, it seemed the perfect cafe. Surrounded as it is by a number of thriving attractions where plenty of other entrepreneurs are now happy to invest in businesses both similar and complimentary, we were expecting an excellent cafe experience.

We were wrong, and we were reminded of three factors that are essential to success in an independent shop, even if all the other ingredients are in place. First is customer service. We were not greeted at all, and our orders were taken and prepared grudgingly by the younger of two women working at the time. The other employee then turned off the lights, and though the sunlight allowed us barely to notice the change, this was our first hint that we were about to learn about the second factor. It was 2:00 on a busy Saturday afternoon, and this cafe was closing. In fact, it was closing as we walked in the door, but this had not been communicated. We were advised that the time was posted on the door -- and we advised (very politely given the circumstances) that the door through which we had entered IN PLAIN VIEW had no such sign.

The closing time was bizarre, given the fact that the entire neighborhood was bustling. While we were inside, many people were walking the neighborhood while others struggled to find parking. Both Travessia and the Ocean Explorium across the street had groups of visitors, many of whom might have welcomed a coffee, but the cafe was closing earlier.

This leads to the third factor, which is a failure to pay attention to one's surroundings. Although the location of this cafe must have been chosen on the basis of surrounding businesses and institutions, its hours of operation -- and orientation toward customers -- was not affected by changes in this dynamic downtown. The staff were only vaguely aware that the business next door -- which shares a common entrance -- had recently expanded, and had not therefore considered the positive implications for their own shop.

Of course, I do not entirely blame the workers themselves, at least not entirely. Their behavior was unlike anything either of us has done in food or retail work, but the real culprit is a manager who has clearly failed to cultivate a spirit of pride in the establishment and focus on customers.

As a geographer, I often repeat that location matters. But it offers no guarantees, either. 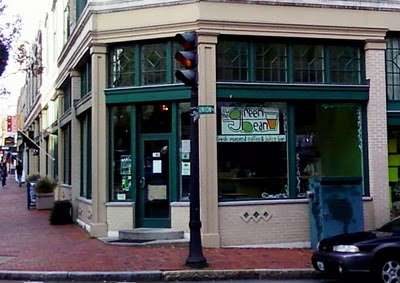 Shop hours are scrawled on a cardboard sign on the main
entrance, but not posted at all on the second entrance.

Posted by James Hayes-Bohanan at 10:38 AM