Earlier this year, I posted two items about Carl Safina's The View from Lazy Point, which may be the best environmental book since A Sand County Almanac, a good environmental book being one that celebrates and explains the world as it is and warns gently but deeply about the consequences of our disregard for it. The first post was simply to alert my readers to the book and Safina's beautiful writing; the second was to share Safina's cogent comparison between our exploitation of whales a century ago and our exploitation of oil today.

Pam and I finished reading the book last night, and it is full of post-it notes on passages that one or the other of us found particularly powerful. (See Pam's marvelous review on her "Library" Books blog.) As I hinted in my first post almost a year ago, this might be the new text in my "flagship" Environmental Geography course, though the text I have used for more than a decade was written by close friends and mentors. Lazy Point is just that good as an introduction to what is going on with planet Earth these days.

A recurring theme in the book is rising water, an inexorable process that we will see increasingly in the news, starting recently and for the rest of our lives. Even as I give a talk this evening about the drought gripping East Africa, the places that do not have too little water seem to have far too much.

As the UAE's Khaleej Times reported this week, Climate-vulnerable countries are meeting in Bangladesh out of a shared concern about rising sea level. Melting ice and thermal expansion are combining to put countries with low-lying topography at the front lines of climate change that is well underway. Even before such countries are thoroughly inundated, they are becoming increasingly vulnerable to occasional high water from storms, tsunamis, or even routine tidal fluctuations. Because those who have contributed the least to atmospheric carbon-loading are among those who are suffering the most, former UN Human Rights High Commissioner (and former Irish President) Mary Robinson has made Climate Justice the new focus of her work. She met leaders of vulnerable nations in February, also in Bangladesh. 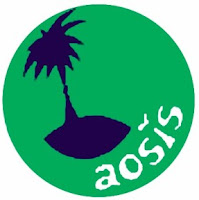 The South Asian nation (formerly East Pakistan) is the largest critically vulnerable country, already losing thousands of people annually in floods that result from a combination of deforestation at a regional scale and climate change on a global scale.

Many of the other extremely vulnerable nations are small, low-lying islands, many of which are members of the Alliance of Small Island States (AOSIS), about which I wrote for Wiley GeoDiscoveries last winter. One such state is Maldives, whose cabinet famously held a meeting underwater in 2009 to draw global attention to its plight. 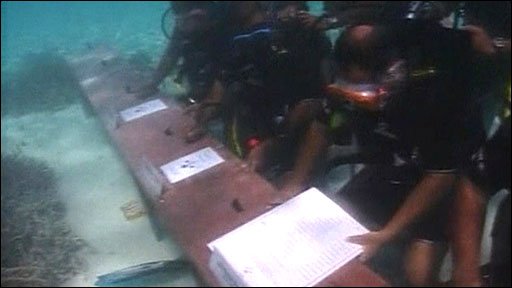 Because small islands are so much more visible on our giant EarthView globe than on most maps or globes, this middle-school outreach program has led me to take a much greater interest in the island nations of the world, and a number of my EarthView blog posts describe various aspects of their geography.

Posted by James Hayes-Bohanan at 5:36 PM

Email ThisBlogThis!Share to TwitterShare to FacebookShare to Pinterest
Labels: GEOG130