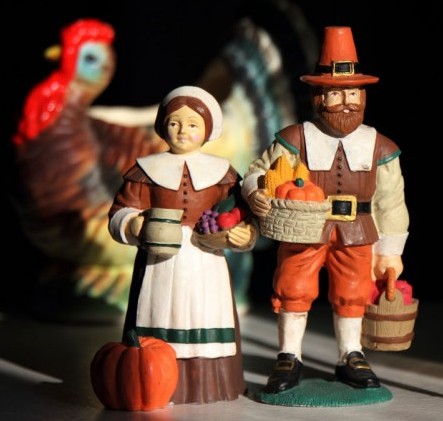 Yesterday we enjoyed a very pleasant and fairly traditional Thanksgiving dinner with friends. Living only a dozen miles or so from Plymouth Rock, we cannot help but give the holiday a lot of thought. It is one of our favorites, despite knowing all too much about the myths and realities of the original feast.

One thing that is often forgotten is that although the Pilgrim's first feast was in Plymouth, it was not the first place they tried to settle upon arrival in what would become the Bay State. As comedian Jimmy Tingle explains, they first tried the other side of the Cape Cod Bay, in Provincetown, which was no easier to book then than it is today. His riff beautifully captures many Bay State nuances that help to define our sense of place.

It comes as The New Yorker also sends up the Pilgrims in a mockery of today's immigration discourse and as a Jimmy Kimmel overlays a snippet of that discourse on the Charlie Brown Thanksgiving special.

Today, by the way, is not just Franksgiving Day, but also the anniversary of a very significant event in the history of Bay State waters -- the rescue of 29 sailors during a ferocious storm in 1888. The rescue took place in Hull, just a bit north of Plymouth and Cape Cod Bay, but the U.S. Lifesaving Service is most closely associated with the Cape itself, where at least 3,000 shipwrecks have occurred.
Posted by James Hayes-Bohanan at 3:32 PM