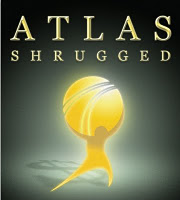 This week NPR's Morning Edition is exploring some of the influential thinkers who have influenced the current generation of politicians. It is fitting that the discussion begins with Ayn Rand, whose Foundtainhead and Atlas Shrugged loom large in the formative thinking of the libertarian wing of the Republican party.

Andrea Seabrook begins her story on Ayn Rand with excerpts of an interview between Rand and Mike Wallace, in which her ideas are contrasted with the conservative thinking of the day. Rand advocates a politics far more conservative than Eisenhower, who was president at the time.

Having emerged from the Soviet Union in the early days of the Cold War, she equated any government role in the economy with the totalitarian approach taken by Stalin. She retained the Soviet aversion to religion, arguing for a reliance on pure reason, rather than faith or even altruism.

Replacing faith in God with faith in the "invisible hand" of markets, Rand argued that only entrepreneurs are productive, and that any level of taxation and regulation are inherently destructive, because they victimize those on whom the rest of society relies for economic growth.

As Seabrook explains, Rand was considered a fringe thinker for many years, but now such assertions are an article of faith. That's right: faith in the private sector has become a new fundamentalism. A million-dollar birthday party for an executive is a productive use of shareholder money, but a million-dollar library  is not a productive use of taxpayer money. Hedge-fund managers need protection from teachers and firefighters, the latter being parasites on the former. By definition, no parasitic worms inhabit Rand's private sector, and all public work is wasted effort.

Of course, even those who most adoringly quote Rand are selective in their application of her reason. Government spending in the military sector (especially for hardware, not so much for soldiers and veterans) is a glaring exception, as is government intervention in matters of sexuality, a contradiction to which Rand the atheist would surely object.

Incidentally, after posting this I remembered the last time I mentioned Ayn Rand on this blog was in the summer of 2010, when one of her devotees inadvertently revealed his dependence on government programs. See my "Libertarians in Space" post for an explanation of the many ways in which the libertarian message below was subsided by taxpayers.