Buddy Valastro is known as television's Cake Boss for his elaborate cake designs and his ability to transport unusual cakes from his shop in Hoboken to wherever they might be wanted.

Episode 15 of Season 4 is entitled Houses, Help and Hitting the Road. It is the story of Valastro's biggest challenge to date: feeding 4,000 guests at the 40th anniversary party of Century 21. Not only is the realty network focused on location, but its membership is truly global, inspiring Valastro to concoct a truly global creation reminiscent of our own EarthView. (Big as this Rice-Krispie-filled decoration is, its volume is only 1/500th that of our inflatable globe, though undoubtedly much tastier.) 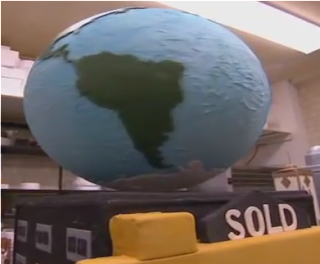 Much of the episode is dedicated to the logistical challenges of making, transporting, and serving such a colossus. The geography of vernacular landscapes throughout the world is reflected in the parts of the cake that represent various kinds of houses.
For geographers, though, the most dramatic moments arise when Valastro realizes that a rather significant land mass is missing from the design. His indignation is endearing ("Where's Asia? You gotta fix Asia!"), as is the reference one of his staff members makes to Pangaea as they discuss remedies. In reality, none of the former continental configurations quite match the erroneous cake decoration, but the final result is magnificent.

View the episode in two parts on YouTube: Part 1 and Part 2.

Posted by James Hayes-Bohanan at 6:53 AM