Almost every January since 2006, the city of Matagalpa in northern Nicaragua has been the gateway to the coffeelands of the states of Matagalpa and Jinotega that I visit with students as part of my Geography of Coffee study tours. Starting with that first visit, we have always taken the time to see the grave of Benjamin Linder, an engineer who was among the many volunteers who came to Nicaragua to support the revolutionary project of the 1980s and found themselves at odds with a U.S. president determined to crush that revolution, through the illegal support of the Contra War.

We learned from our guide that Linder had in fact been killed by insurgents who were funded by his own government, and that he was so well loved by the Nicaraguan people that he was buried with honor in the city's main cemetery, even though an alternative cemetery for foreigners who died in the region. I recall being impressed that Linder's family allowed him -- a young man -- to be buried so far from home.

My student Nikki took the photo below during my 2011 study tour; it is a view of Matagalpa from the Ben Linder grave site. When she forwarded it to me today, she commented that she had already forgotten how beautiful the cemeteries are. That may have been part of the Linder family's decision-making: not the physical appearance itself, but the attitudes towards the dead that lead to such special care being taken.

We were thinking of all this in preparation for an event on our campus during the day of Halloween, in which we explored the traditions associated with death in Latin America, particularly the Day of the Dead (El Día de los Muertos, sometimes pluralized) as practiced in Mexico. The Day (or Days, as both November 1 and 2 may be celebrated) is well known as the time when the veil between the living and the dead is considered thinnest, providing the best opportunities for the relationship between the two to be celebrated.

It would be a mistake, though, to view these two days in isolation, as some kind of departure from the norm, as Carnival so often is. The Day of the Dead, in fact, is just the most exuberant manifestation of a special regard for the dead and departed that is felt throughout the year. And although this finds its greatest expression in Mexico, throughout much of Latin America, death is treated quite differently than it is in the United States or Europe.


When asked to share something for the day, then, I turned to my experiences at Ben Linder's grave in Matagalpa. As I mention above, I have visited for five of the past six years, but over time the visits took on more meaning for me, as I became more familiar with Linder, his work and sacrifice, and the regard in which he is held in Nicaragua. His death had occurred just a couple of weeks before my own marriage, and in retrospect I have to admit that great many changes we were undertaking at that time dimmed my recollection of a story that I surely followed to some extent at the time.


My interest began to deepen as I prepared for the 2009 study tour, when I learned that a BSC alumnus (from before my time, so I can claim no credit for his many achievements) had worked on a partnership to create a very special café in León. As described by Dean Cycon in Javatrekker, veterans of the war on both sides -- were brought together to form a number of projects by which they help themselves, each other, and other people who have suffered limb loss or other serious injury. When given a chance to name the cafe that they would operate in order to support the other projects, veterans of both sides chose to honor Ben Linder.

In January 2011, we worked with Matagalpa Tours to include a portion of the tour in the FAR north of Nicaragua so that we could visit the small hydroelectric plant that Linder was working on at the time of his assassination. More than two decades after his death, this renewable energy project sits in the center of the now-bustling town of Bocay. 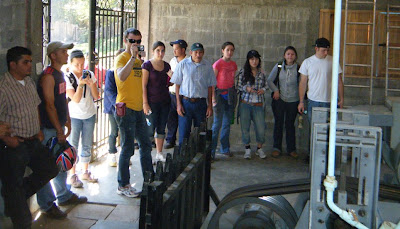 Linder worked in the tiny villages of El Cuá and Bocay, which had been long neglected by the US-allied Samoza regime. The Contras (which means Those Who Are Against) were determined to undermine (and often literally to mine) any positive developments that could be associated with progress for the new Sandinista government.
The covert war funded by Ronald Reagan killed many Nicaraguans and just one American, Ben Linder. To this day, his sacrifice is honored on the anniversary of his death, though the banner below remained prominent in Bocay many months after the most recent commemoration. The word "PRESENTE" is capitalized deliberately, for the same reason it is often set off with exclamation marks: ¡Presente! When activists meet to protest US-funded political assassinations -- which are ongoing in many parts of Latin America -- they often call the roll of victims, to which the crowd answers ¡Presente! meaning that these martyrs are in some very important sense still with us. 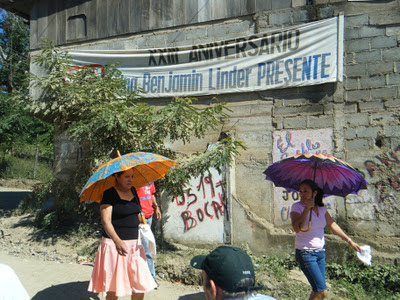 Our study tours to Nicaragua coincide neither with the anniversary of Linder's death (April 28, 1987) nor with El Dia de Los Muertos, but beginning in 2011, our visits to his grave include some of the rituals associated with the care of grave sites. In addition to a brief retelling the story of his life and death (see video part one and part two and is told much more richly in the 2008 documentary film American/Sandinista), this time we decided to honor the memory of Ben Linder by cleaning up the site, leaving some flowers, and drinking a toast in his honor. 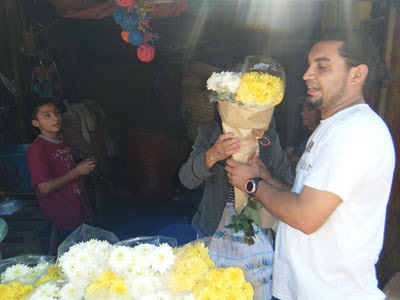 On the way to the cemetery, we stopped with Freddy, our most excellent guide, to purchase flowers. These flowers are grown locally, part of a substantial flower-growing industry in the region. This area is historically quite isolated, but modern transportation and communication systems mean that flowers picked this afternoon in Matagalpa can be at a flower wholesaler in Boston at dawn tomorrow.
Linder's grave indicated that he was an internationalist whose light will always burn brightly. Between the dates of his birth and death is shown a unicycle: Linder was celebrated as much for his play with children as a self-taught clown as for his work on the civil engineering projects for which he was hired. Above the motorcycle is a dove in a circle of stars. 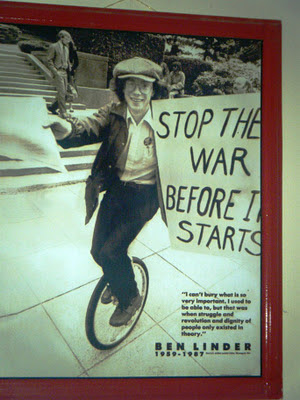 At Bridgewater State University, I worked with faculty, students, staff, administrators, and off-campus collaborators of many kinds to develop a proposal for a café that would have been named after the original Ben Linder Café in Nicaragua, honoring both the healing work of that project and the life of the man for whom it was named. Building on the concept of the original BLC, the intent would have been to create the best possible campus coffee shop, a model café with a commitment to continuous improvement in social and environmental sustainability.

The proposal has not been approved, but as the community of Bocay has done, so also will Bridgewater recognize the anniversary of Ben Linder's death -- specifically the 25th anniversary coming up on April 28, 2012. Nicaragua Nexus will be an opportunity for academic, religious, and other groups in and near Massachusetts to gather in Bridgewater, simply to compare notes about the many different kinds of partnerships and projects undertaken in Nicaragua by people from this region.

Posted by James Hayes-Bohanan at 11:49 PM