Whenever my favorite librarian is reading a book, she keeps sticky notes nearby to mark any passage that mentions libraries. Even a single mention will get the book reviewed on her "Library" Books blog, a sort of metablog about the representation of libraries in written works. (She uses a digital equivalent of the sticky-note process for e-books.)

When we are reading a book together, I ask her to do the same for me, writing the letter "J" on the notes she attaches to passages that interest me as a geographer, coffee maven, or both. As she adds library references to her blog posts, she removes her notes, and I follow up, usually with a shorter post either on this blog or on social media (my "microblogs"). Looking at the drafts folder of this blog, I see that I am half a year behind her very important Timbuktu post. Before I catch up there, though, I need to make a few notes about another book we read together recently, and about which she wrote more extensively -- excerpts from 25 years of the personal diaries of the inimitable David Sedaris. 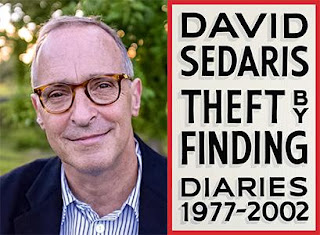 Selected from thousands of pages of his wry observations of the world from the point of view of a struggling (and later not-so-struggling) artist, we could hear his voice as we read each page of Theft by Finding. Although coffee shops, bad coffee, and geography permeate the work, I noted just three passages.

On October 17, 1986, he describes a small encounter in a Chicago coffee shop -- where he spends much of his time -- that also involves a library book:


"Tonight at the coffee shop a telephone number fell out of my library book and a man pointed it out to me. It was not an important number, but I pretended that this guy had saved my life. He did not seem to care."

I could almost hear the little music NPR puts behind his voice when he makes this kind of deadpan comment.

We were reading the book aloud (by which I usually mean, Pam was reading it to me), and so exclaimed in turn, "Coffee movie!" and "Library movie!" Even though it is not a movie. This is what our home life is like.

On December 21, 1989, also in Chicago, he describes going out with his friend Ben and Ben's mother, who was marking the tenth anniversary of her divorce.


"At first she thought she'd order the pancakes and have a beer to go with them. Then she changed her mind and went with the bacon cheeseburger, deciding that instead of the beer she'd have coffee."

I have to admire the unconventional beverage pairings. And Sedaris had to admire that she worked at B. Dalton, which is where Pam worked when we started dating, not long before this entry, but far away in Baltimore.

Much later, on January 7, 2002, he writes in Paris, describing a coffee-related crisis during a rather bleak winter day there:


"Every day feels the same, in part because every day looks the same. Again yesterday it was cold and cloudy, the sky the flat gray color of a nickel. We'd planned to go to Normandy but it turns out the agency in Argentan has no more rental cars. Going without one means that Hugh will spend the entire week in a sour mood, threatening to sell the house and move back to New York. We'd both looked forward to getting away, but I'm definitely handling the disappointment better than he is. I just watched as he poured an entire bag of coffee into the stovetop espresso machine. Grounds spilled onto the counter and when I asked what he was doing, he brushed them onto the floor, saying flatly, 'Making coffee.'"

That was a passage we had read just before our most recent encounter, in the book-signing line after his uproarious appearance at the Zeiterion Theater. "Have we met?" he asked, recognizing us as the groupies we have begun. We keep coming back, because he is as kind in person as he is acerbic on stage and on the page.

He is also prolific -- we look forward to many more of his diaries going to press in the future.

Posted by James Hayes-Bohanan at 1:27 PM