Racing to the Quake

Thirty-two years and six hours after Mexico City was shaken by its most devastating earthquake, the city was rocked again, and this just two weeks after a strong quake shook the southern state of Chiapas.

Immediately after the September 19, 2017 earthquake, hundreds of its citizens ran towards its many collapsed buildings.

The September 20, 2017 edition of The Takeaway begins with a detailed interview with a former Mexican diplomat, who explains the lessons residents of Mexico City have learned, and compares the experience of the capital with that of rural Chiapas, which was struck by a quake earlier this season. No longer available on WNYC, this segment is on iTunes.

A few days later, journalist Maya Kroth described the response in detail, especially the work of Los Topos (The Moles), the volunteers known for their extraordinary rescue efforts. Her interview with Todd Zwelick is followed by a conversation with Janise Rodgers, CEO of GeoHazards International, who discusses the vulnerability of schools throughout Latin America. 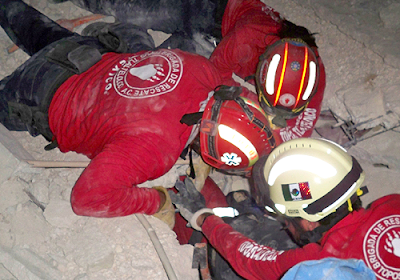 It is useful to consider the context of Mexico City, built as it is in a former lake bed. It is more than 7,000 miles above sea level, but it is at the bottom of a volcanic valley, built on unconsolidated sediment that has flowed from surrounding peaks. To get a sense of the scope of the affected area, begin in the map of the city center below, and gradually zoom out to the mountains.

It is vulnerable to the movements along the Middle America Trench, one of the world's most active tectonic convergence zones. Both the September 7 and September 19 earthquakes originated along this deep boundary, though the distance between them suggests no direct causal connection.
The U.S. Geological Survey Earthquake Hazards Program provides real-time and follow-up information about earthquakes throughout the world. Its report on the September 19 earthquake reveals that it was an intraplate event, meaning that it happened within the Cocos plate, rather than at a plate boundary. Nonetheless, the event was very close to the boundary, 48.0 km below sea level and near a sharp bend in the plates.
The USGS report on the Tres Picos Magnitude 8.2 September 7 event along the Chiapas coast does not include a comparable cross section, but it does report a similar depth and intraplate location. (Note: USGS gives a September 8 date, because all of its instruments follow Greenwich Mean Time.)

These thorough analyses by scientists based in the United States is possible because its network of seismic stations allows for detailed measurements of earthquake activity, regardless of its location on the planet. Similar efforts are devoted to the USGS Volcano Hazards Program, but the nature

Posted by James Hayes-Bohanan at 4:30 PM